Johnson leaves them in his dust at Pocono

Johnson leaves them in his dust at Pocono 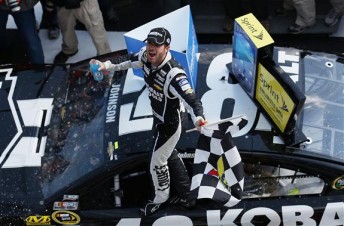 Jimmie Johnson has once again shown why he is one of the greatest drivers in NASCAR completely dominating the Party in the Poconos 400.

Johnson scored his third win of the season, third victory at Pocono and his 63rd visit to victory lane. He is now 51 points clear in the standings.

A week after a penalty for jumping the final restart at Dover knocked Johnson out of a near-certain victory, Johnson beat Greg Biffle to the finish line by 1.208 seconds.

“What a race car!” said Johnson.

“Not only a great race car but an engine. We had fuel mileage and plenty of power. It was awesome on the straightaways today to be able to do what I wanted around other cars.

“So hats off to chassis, aero and the engine shop for this awesome race car.”

Johnson was strong on long runs, especially the opening sequence when the first 65 of the 160 laps ran without caution. Then even on the shorter runs he was unstoppable as he led a total of 128 laps in the 400 mile race.

Biffle was happy with a runner-up finish that jumped him three positions to 10th in the standings, but he conceded that his No. 16 Ford was no match for Johnson’s Chevy SS.

“Jimmie was in a league of his own,” said Biffle, who took the green flag from the fourth position on the final restart with four laps left and surged past Earnhardt and Kyle Busch in the first corner. “I was going to have to get up beside him, take the air off him–something to try and gain an advantage.

“But I gave him such a good push on the restart I couldn’t catch back up with him… I couldn’t get him.”

Australia’s Marcos Ambrose climbed from 30th at the start to 17th at the finish, although prior to the final re-start he was looking a few places better. However, a stacked re-start with four laps to run he was shuffled back.

“We had a 17th-place car and we finished 17th with it, so we’ll take it. We fought all day and rallied hard. We couldn’t quite get track position there at the end on those restarts, and then I got checked there on that last restart and we lost a few spots.”

RESULTS: Part in the Poconos