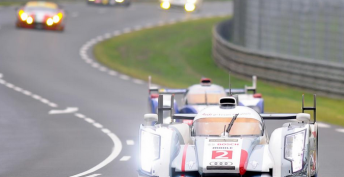 Loic Duval recovered from nasty crash to lead Audi to a sweep of the top three times in testing for the Le Mans 24 Hour.

Duval ended up nailing a 3:22.583s lap around the La Sarthe circuit in the Audi R18 e-tron quattro. Earlier he had a heavy whack in the #2 machine he shares with Tom Kristensen and Allan McNish at Tertre Rouge.

The #3 Audi of Lucas di Grassi was second three seconds down on Duval’s best with the #1 Audi of Andre Lotterer third.

In the lead-up to the marathon on June 22-23, the LMP2 field was headed by Olivier Pla in the OAK Racing Morgan-Nissan.

Aussie John Martin clocked the 13th best time to be fourth fastest among the LMP2 runners in the G-Drive Oreca-Nissan.

Two of Martin’s compatriots Ryan Briscoe and Jason Bright, having their Le Mans debuts, were also in action in their respective classes.

Ex-F1 driver Karun Chandhok clocked the 22nd fastest overall time in the Murphy Prototypes Oreca-Nissan he is sharing with topline Kiwi driver Brendon Hartley who did not do any running.