Lamattina and Zappia lead the way at Willowbank

Lamattina and Zappia lead the way at Willowbank 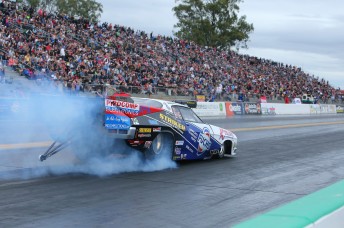 Lamattina had the huge crowd cheering as he blasted to a 4.610 second pass at 532kph. Darren Morgan was second quickest with two sessions to go. American star, Tommy Johnson Jr had a troublesome run in qualifying one and the Rapisarda Autosport team is working hard to get him comfortable with the Willowbank conditions.

It was all smiles in the Lamattina compound, however:

“We’ve had our back against the wall and allowed ourselves to get in a position where Darren is ahead of us and that is our fault, not Darren’s,” said Lamattina.

“We know we have the right set up and car and tune up but we haven’t had the components be so forgiving. The time was good tonight but the speed blew us away.

John Zappia tore to the second fastest Top Doorslammer pass ever seen in Australia, lapping just 0.03 of a second behind his run at last year’s Winternationals. He will need to do a similar time in the third qualifying session today and he will be credited with a new national record.

Jason Grima continued his position as the quick man in Pro Stock, getting his speed under the seven second mark with a 6.989 second mark. The tightness of the field saw the bump spot at the end of the third qualifying session being just a 7.106 second pass, confirming its status as the fastest field in Australian Pro Stock history.

Meantime, American based Australian Rhett Lougheed performed the fastest ever Pro Stock Motorcycle pass to establish the quickest time so far in that category in Australia.

Other racers to be sitting atop the order with two sessions left to go include John Cannuli in Top Alcohol and Chris Porter in Top Bike.

Two more qualifications will be held during Sunday with eliminations to take place Monday at Willowbank Raceway, Champions Way, Willowbank.