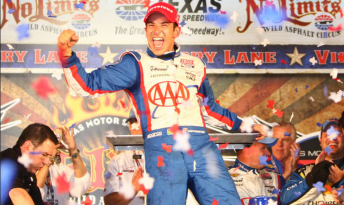 Enduring its leanest start to a season since the 1970’s, Penske struck back with a competitive package which came down to a tyre management battle after Firestone issued a compound which degraded quicker.

It was a copybook Penske plan which Castroneves carried out to the letter in beating Ryan Hunter-Reay (Andretti Autosport) with Tony Kanaan storming into third position.

The victory was also a drought-breaker for the Brazilian three-times Indy 500 champion who had not won since Motegi, Japan, in 2010. It was Castroneves’ fourth victory at Texas adding to his 2004, 2006 and 2009 triumphs.

As the seventh different winner in the opening eight races Castroneves now takes the outright lead in the IndyCar standings after going into the weekend equal with Marco Andretti, who finished fifth.

With 16 laps to go Hunter-Reay began to take out some chunks out of the Penske driver’s lead however it became evident that Castroneves was controlling his lap speed as he needed.

The Indy 500 polesitter Ed Carpenter finished fourth with Chevy powered cars dominating the race just like they did at Indianapolis. 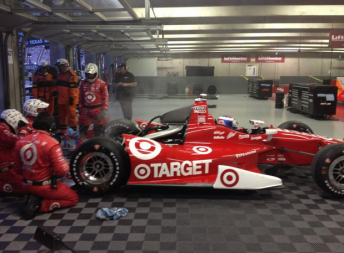 Dario Franchitti finished sixth in his Honda-powered Dallara with pole winner Will Power finishing seventh after being out of the window for most of the race.

Franchitti’s team-mate Scott Dixon found himself in the pits for a gearbox change on lap 63 of the 228-lap event before ultimately being wheeled into the garage and out of the race.

Earlier several of his crew members were injured when a flash fire erupted as the crew was working on the car with the engine cover removed.

By lap 90 Takuma Sato (classified 11th) was circulating in seventh place after starting 21st and Justin Wilson (15th)  had made similar big gains after moving into fifth from 20th off the start.

Andretti, who with Castroneves dominated the first portion of the race, filed into the pits on lap 102 after leading 57 laps which also served as a chance for the third generation racer to simmer down after becoming angry over slower traffic.

Castroneves was out in front and running long on a stint before leading the top five just short of half race distance into the pits for the next round of stops.

On lap 113 Oriol Servia spun the Panther Racing car bringing out the the yellow. Before the race, Panther had announced that Servia and Ryan Briscoe will now alternate the drives in the Chevy-powered Dallara for the rest of the season.

The incident allowed leader Castroneves to pit the #3 Penske Chevy to take on new rubber, fuel and a front wing adjustment.

Once the field settled down again after the restart the Penske cars were running one-two with Castroneves dictating from Power as the most successful Indy team in history looked like arresting its horror 2013 season.

Last start winner Simon Pagenaud (classified 13th) did a great job to save his car from hitting the wall after being elbowed from the inside.

Soon after Kanaan had blasted past leader Castroneves with 65 laps to go after bolting on fresh tyres.

Castroneves then re-established a 5s lead with less than 50 laps remaining as strategy began to play out with the Brazilian told to look after the tyres and also switch to fuel slot 2.

Kanaan pitted from second with 30 laps to go but rejoined a lap down as he started his assault on fresh rubber.

Andretti pitted with 24 laps to go, completing an 8.4s service however the strategy to leave his final tyre stop until the last minute left the driver with little time to make up the deficit, eventually finishing fifth.

In contrast Penske nailed the set-up and strategy for Castroneves who now eases to a 22-point lead in the standings over Andretti with the IndyCar series remaining on a knife edge.