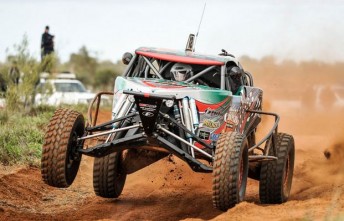 Hayden Bentley’s bid to become the first single-seater buggy driver to win the Tatts Finke Desert Race in 15 years is off to the best possible start, with the South Australian leading at half distance.

Gallard and his crowd-pleasing Geiser Brother Trophy Truck failed to take the start of this year’s event after suffering engine problems in Saturday’s Prologue.

Beau Robinson held up the Trophy Truck honours in Gallard’s absence to be second fastest, 2 minutes and 6 seconds shy of Bentley.

Five-time Finke winner Dave Fellows had set the Prologue pace in his Jimco-Nissan but is believed to have suffered a mechanical failure 20km from the end of the stage.

In the motorcycle division it was brothers Todd and Jake Smith that set the pace – the Honda-mounted New South Welshman separated by less than four minutes at the top of the order at day’s end.

Queenslander Anthony Roberts was third on his Yamaha ahead of Jarrod Bewley (Husaberg) and Jack Dooley-Mcdonnell (Honda).

The competitors will head from Finke back to the finish line in Alice Springs tomorrow.