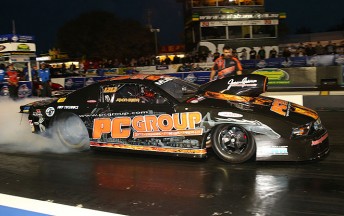 Jason Grima heads the Pro Stock field after one qualifier

Pro Stock has started the Fuchs Winternationals at Willowbank with a bang, setting the quickest ever field in the category’s history – in the first qualifying session, which was headed by Jason Grima.

The massive Pro Stock field – which will form a full 16 car field for Monday’s eliminations – lived up to its reputation as arguably the most competitive form of motorsport in Australia – and it still has three sessions to determine the field.

Grima charged down the Willowbank quarter mile in 7.016 seconds, the much vaunted six second bracket flirted with but not broken in the cool night air.

He headed Bundaberg’s Aaron Tremayne – who’s showing a return to form and Wayne Daley in the field.

“It’s good to get the first one out of the way and get a good run straight up,” said the driver of the PC Group machine. “It’s all in the team work, they all think about getting everything right. Having James (Grima) and Brandon (Huhtala) together, they are unbelievable with their set ups.
“Whether or not we go into the sixes will depend on the humidity. James and Brandon will let me know what they think and go from there.”

The 16th position bump time is 7.124 seconds held by Ian Brown, seeing the entire field covered by just a tick over one-tenth of a second.

The Tucker family’s world first with father, son and daughter all racing in the one category didn’t get off to the best start. Last year’s Fuchs Winternationals winner, Shane Tucker was sixth quickest, whilst sister Kirsten Cannuli was 17th and father Rob in his racing return 19th of the 22 car field.

Throughout day one, times quicker than the national record were established by Greg Leahy in Competition, Nick Panagiotlaris in Super Stock, Corey Buttigieg in Competition Bike and Robert Rigoli in Super Compact.

Qualifications for the remainder of the professional categories, including Top Fuel and Top Doorslammer begin today with the third and fourth rounds of qualifying conducted Sunday. Racing for the Aeroflow Sportsman support categories begins today with Finals and professional class eliminations on Monday.