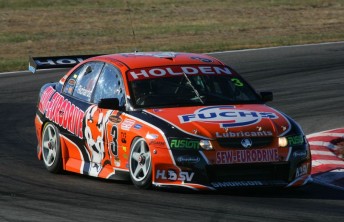 Jason Richards on his way to victory at Winton in 2006

The Commodore VZ finished second in the 2005 Bathurst 1000 with Richards and Jamie Whincup behind the wheel, while the former used the car to take his only solo V8 Supercars race win at Winton the following year.

The car has recently been purchased by Kumho Series regular Jim Pollicina and relocated from Perth to the east coast.

Walter’s Dunlop Series campaign with Minda Motorsport this season comes after a multi-year lay-off from the sport, and it is hoped that a run in the third-tier V8 Supercar class will speed up the Tasmanian native’s transition back into the drivers’ seat.

“It’s just a one-off thing for Winton,” said Walter of his Kumho debut.

“I need to do more racing because I haven’t done anything in over three years, so I’ve got to get back into it.

“It’s better to be racing with other guys than testing on old tyres and driving around and around by yourself.

“There’s some big gaps in the Development Series calendar, so it’s a good way to stay sharp in the meantime before the next round in Townsville in July.”

Walter currently sits 22nd in the Dunlop Series standings after two rounds. He has one previous Kumho Series start to his name, which came at Eastern Creek in 2010 and netted a race victory.

The Winton event will mark Round 3 for the Kumho Series and take place with the Shannons Nationals event on June 22-23.