Volvo is the latest manufacturer being linked to a V8 Supercars Championship campaign as practical deadlines loom for any fresh 2014 entries.

Speculation surrounding new marques has been rife following V8 Supercars Commission chairman Mark Skaife’s declaration at a Nissan Motorsport function in Austin last month that he expects “some really important announcements” on the matter later in the year.

Garry Rogers Motorsport has been at the centre of new manufacturer talk for more than 12 months and is said to be the team of choice for a possible Volvo assault.

Speedcafe.com understands that a deal between the two parties could be complete as soon as next week.

Volvo Australia is currently denying interest in V8 Supercars, but has recently shown a strong desire to add sporting prowess to its long standing image of safety and reliability.

Its actions have included the commissioning of a limited run of high performance S60 road cars from global Volvo Motorsport tuning house Polestar that are set to arrive in the country later this month.

Although factory supported S60 racing programs are already in place in the Scandinavian Touring Car Championship and the Pirelli World Challenge (USA), a Volvo Australia spokesman poured cold water on talk of a V8 Supercars effort when approached by Speedcafe.com.

“Motorsport is something that is successfully leveraged by, for example, Volvo Sweden and Volvo Cars North America,” he said.

“Volvo Car Australia is constantly looking at a range of partnerships and, like a number of automotive manufacturers, is fully aware of V8 Supercars’ Car of the Future strategy, but we have no plans to go motor racing.”

Garry Rogers meanwhile told Speedcafe.com that a potential Volvo tie-up was “news to me”.

“I take absolutely no notice of any paddock chat because that’s exactly what it is,” he said of the Volvo talk.

The cagey veteran admitted that he is working hard on securing a factory deal for his team, but suggested that having a new car ready for next season would be difficult. 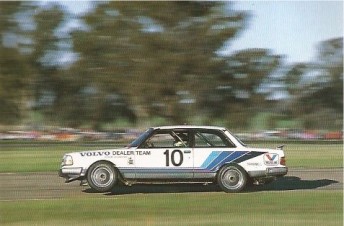 Robbie Francevic on the way to the 1986 ATCC crown

“It’s a process that has been ongoing for quite some time and it’s very frustrating but you’ve just got to keep working, it’s all you can do,” he said of courting a new marque.

“I’ve just about given up on that (2014) because it’s probably too late,” he added of next season.

“We’re already in June and we’ve got a lot of big races coming up. For me it’s looking difficult.”

Volvo already has an Australian Touring Car Championship victory to its name thanks to Robbie Francevic’s success in 1986 with a dealer supported 240 Turbo Group A campaign orchestrated by Mark Petch.

Volvo Australia more recently backed a Super Touring program in Australia that included the driving talents of Peter Brock and Jim Richards and culminated in the 1998 Bathurst 1000 and 1999 Manufacturers’ Championship crowns.

GRM has campaigned Holdens since it joined the ATCC as a single car team in 1996, but currently receives no financial backing from the manufacturer.