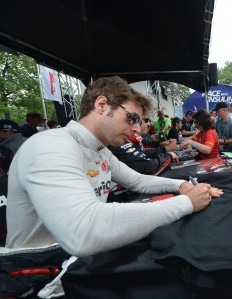 Australian driver Will Power has been placed on probation for the remainder of the IndyCar season following his reaction toward Sebastien Bourdais at last weekend’s Detroit round.

Bourdais collided with Power after a restart during Race 2 of the double-header meeting with the Toowoomba driver later climbing out of the car and throwing his gloves at the Frenchman when he circulated around on a safety car lap.

Under Rule 9.3.1.8, Power was penalised for improper actions toward a fellow competitor. Bourdais also found himself in hot water after comments made to a pit lane official after Race 2 and was also placed on probation.

In other penalties the #16 Rahal Letterman Lanigan entry of James Jakes was fined $10,000 for two rear wing breaches following a check after qualifying.

Sebastian Saavedra received a $30,000 fine for making an improper gesture toward a fellow driver after contact in Race 1. Saavedra, whose car was buried in a tyre barrier, flipped a double bird toward Marco Andretti after the incident.