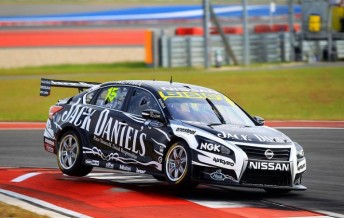 Nissan Motorsport drivers Rick Kelly and Michael Caruso say they’re unsure as to what their Altimas can deliver in Darwin despite the former’s outstanding run of results last time out in Austin.

Kelly finished all four races at the Circuit of the Americas inside the top 10, scoring a best result of sixth in the first Saturday heat.

The results came despite an under developed engine package seeing the Nissans struggle to match their rivals out of slow corners and down the long main straight.

At 1.1kms, Darwin’s Hidden Valley circuit boasts the longest straight on the V8 Supercars calendar – a run that is entered via a tight second gear left-hander.

The flowing bends around the back of the circuit, however, are expected to suit the sure-footed L33s, leaving the drivers unsure of their overall potential.

“We’ve got a couple of runs on the board now and we have a lot of confidence with the setup of the car, which will really help us as we move forward,” said Kelly ahead of the trip north.

“We know that Darwin has a very long straight with a slow corner leading onto it, so that part of the track is going to be tough for us, but a lot of the other parts should be quite good to us as well, especially with the slippery track surface.

“I’ve got mixed feeling heading into the weekend as far as where we’re going to be, but the important thing for us is to carry the momentum that we’ve gained in Texas through the Darwin event, as we head towards the enduros.” Caruso is hoping that the mixed tyre format, which helped him to his single career V8 Supercars race win at Hidden Valley in 2009, will increase the scope for a strong result.

“We know that the track is very hard on tyres, so it will be interesting to see how the regulations with the soft and the hard tyre combining over the weekend plays out,” he said.

“It will give us a chance to see how we can use strategy to get the most out of the car.

“At this stage of the development process of the Altimas, it’s hard to have an expectation for Darwin because from track to track, our cars are different speeds relative to the field.

“I have no doubt that we’re making improvements each event, but where that puts us, it’s going to be hard to judge.”