James Brock says ‘on your bike’ to thief

James Brock says ‘on your bike’ to thief 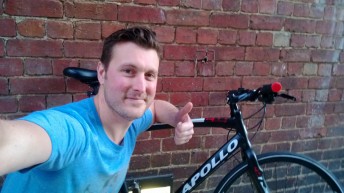 James Brock has switched from being a racing driver to a super sleuth after pulling off a nifty piece of detective work.

Brock, son of the legendary Peter Brock, decided to take matters into his own hands after having trusty bicycle stolen in Melbourne.

Seething that his rather humble means of transport was pinched, Brock put a message out to his mates on social media and within 24 hours was able to trace the location of bike.

“One of my brother’s mates just happened to be on Gumtree and saw it advertised,” Brock, who is taking a year off his racing career to study mechanical engineering at university, told Speedcafe.com.

“So he rang up the bloke who advertised the bike, got the address and then phoned me so we both could go around together to check it out.

“It just so happened that the address is just around the corner from where it was stolen.

“We knocked on the bloke’s door and asked him about the bike which he then proudly brought out and I said, ‘gee that’s a nice bike dude’. He said, ‘take it for a ride’ and I thought about just riding off but thought, no, I’ve got to confront him.’

“So I asked how much he wanted and he said $350. I then said how about I just take the bike and I won’t go to the cops and tell them you stole my bike. He at first denied it and I said, ‘if you want to argue I’ll just call the cops’ and then he ran away which was hilarious because it was at his place.”

The postscript was as classic as the story itself when he posted the outcome of his experience on his Facebook page.

“Thank god for stupid people. The douche who stole my bike yesterday also advertised it on Gumtree yesterday. And I just went and got it back. Thank you very much you knob jockey!”