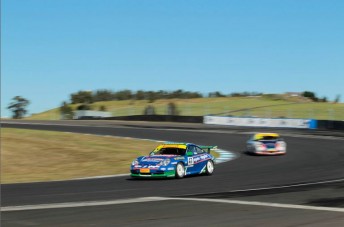 GT3 Cup Challenge cars, like that seen competing at the recent Sydney Rennsport meeting, were among those eligible for the 6 Hour

The return of the Australian 6 Hour endurance race has been postponed until 2014 due to a lack of competitor interest.

The race was to have headlined the fifth round of the Shannons Nationals at Sydney Motorsport Park on July 12-14.

The meeting will still go ahead, with scheduled rounds of the  Australian Manufacturers Championship, Formula 3 Australian Drivers’ Championship, Porsche GT3 Cup Challenge, Australian GT Championship, Radical Australia Cup and Australian Suzuki Swift Racing Series set to be expanded across the gap left in the schedule by the abandoned enduro.

The Australian 6 Hour, which ran in 2010 as a production car event, was to have included GT and production touring car vehicles for its return this year.

A statement from the Shannons Nationals confirming the 2013 event’s demise emphasised a commitment to making the concept work next season.

“A limited entry potential for this year encouraged the promoters to revert to a standard Shannons Nationals round format rather than run a costly enduro with a limited grid,” read the statement in part.

“The move will allow organisers better time to work with categories interested in participating the event and to better integrate it into respective categories’ yearly schedule in 2014.

“The race had been intended to allow competitors from Australian GT and Porsche GT3 Cup Challenge to compete, along with AMChamps and NSW-state based competitors from the Production Touring car series.

“The Nationals remain committed to reintroducing a major six-hour enduro to the calendar and will work closely with potential categories and the ARDC to plan for the 2014 season.”