Dowe: It’s ‘pedal to the metal’ at HRT

Dowe: It’s ‘pedal to the metal’ at HRT 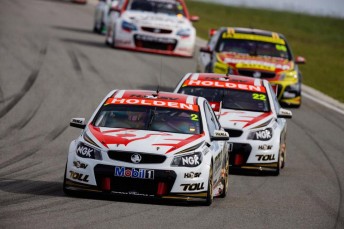 Having focussed heavily on its Car of the Future program through much of last season, a lot was expected of the Holden Racing Team in the early phase of 2013.

Sixteen races in, the top step of the dais has remained elusive for the once dominant outfit, extending a winless streak that stretches back to Bathurst, 2011.

Seventh and ninth in points respectively isn’t stellar for its former champion drivers Garth Tander and James Courtney, but it’s far doom and gloom at Clayton.

The duo have after all amassed 13 top six finishes between them, just three shy of the total scored in the entire 2012 season, and there is promise of plenty more to come.

As the team’s performance director, one of the key men responsible for the continued development of the team’s VF Commodores is Tony Dowe.

Joining the HRT in August 2012 following a short spell with Kelly Racing, the thoughtfully spoken Englishman’s globetrotting career has included stints at the highest levels of Formula 1, IndyCar and prototype sportscar competition.

Much of Dowe’s career has unfolded within the Walkinshaw stable, most notably at the helm of the American arm of the Jaguar’s winning 1990 Le Mans effort, and later leading the operation of the Ligier and Arrows Formula 1 teams. 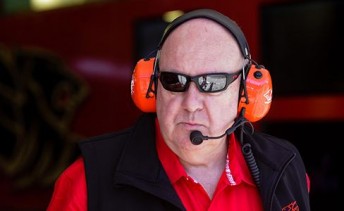 While the move to Melbourne from his former base in Atlanta, Georgia, has suited Dowe tremendously, his thirst for V8 Supercars success remains unquenched.

Speedcafe.com’s Stefan Bartholomaeus spoke with Dowe about the HRT’s season so far and the road ahead.

SPEEDCAFE: This week saw the HRT undertake its first test day since the season started. How did it go?

DOWE: It was good. If you understand that when you test it is for the purpose of how you can improve your performance, all the tests don’t always produce the result you want. But if you learn from it then it goes in the tick column. I think we had a pretty good test where we were able to put a lot of things in the tick column.

The reality is that with the reduced amount of testing, you are often forced into testing at races, which isn’t good. It takes away from the preparation of what you need to do at the race. That means you have to be more adventurous with what you test when you’re able to test.

We had a situation where we had to do validation on some of what we’d already run, as well as running more aggressive items that you wouldn’t normally do. At some point you’ve got to work out whether those work for you or not. If they didn’t work at least you’ve learnt something.

SPEEDCAFE: In the early part of this year, it seems that the test allocation hasn’t been the limiting factor in putting cars on track for testing, it’s been the nature of the race schedule itself. Just turning the cars around has been tough.

DOWE: Absolutely. We arrived back at the shop on Wednesday morning with only three days to turn the cars around before the trucks need to be loaded to head to Darwin.

Fortunately the engines will stay in the cars, but everything else like transmissions and so on… the transmission ratio we used in Texas is the same one we used at Winton, but it isn’t the same as Darwin. There are a ton of things to do.

SPEEDCAFE: You’ve often stressed that developing racing cars is a continual process, but was the front-end upgrade introduced at Barbagallo a significant step in the process this year?

DOWE: It now is because we were trying to develop it at a race… We introduced it on all three cars at Barbagallo. After the first day it was obvious it was better and we only had limited spares but we rolled the dice and put it on Russell (Ingall)’s car. We didn’t think the improvement was going to be as good as it was. Now we’re honing in on how we can use it better.

SPEEDCAFE: Has it been difficult in the early part of the year managing the introduction of new parts when you’ve got three cars and a customer team?

DOWE: Maybe early on, but on Tuesday, for example, Al D’Alberto was kind enough to lend us his engineer so he was integrated into what we were doing. It’s working pretty seamlessly.

SPEEDCAFE: You’ve been integral in the team’s Car of the Future program having joined the squad in August last year. What’s been the biggest key to these new cars? Understanding how the new control elements work in terms of the rear-end and the tyre seems to be quite a job.

DOWE: I think the biggest job is the management of tyres and understanding what is being used and how we progress it forward.

There are still the same number of parts in the cars as we had in last year’s cars, pretty much. It’s just being able to look further down the road.

This is the middle part of the season and we’re getting over the initial rush. The reliability has been really good. We’ve had to learn turn-around on some things and so on, and always when you’re not the quickest car gauging the amount of efforts on improvements is also a big part of the challenge.

DOWE: As we’ve seen what works with the car and how we need to adapt how we set it (up), you also see the drivers adapting their styles to it.

It all goes back to that continual improvement process. Nothing is set in stone and you have to have really good peripheral vision to work on how you get it done.

SPEEDCAFE: As part of the continual improvement there will obviously be more to come. Is there anything particular for Darwin? There has been talk of engine upgrades…

DOWE: There will be some improvements that we carry forward into Darwin, certainly.

SPEEDCAFE: Are you happy with the way the engine program is working between InnoV8 and your own engine shop?

DOWE: Yes. If you look at it, there’s a long supply chain involved in what you’ve got to do and the effort to get that moving is huge. But once that’s moving it’s going to be quite hard to stop. We’ve got to manage how we move forward with it.

Engines are actually easier (than chassis development) in that you have a dynamometer that you can use and see gains. If it’s better on the dyno it will be better in the car. That’s easy.

The more difficult part is the use of tyres and track time in testing and at race meetings. That’s not as easily defined.

SPEEDCAFE: Personally, are you enjoying the challenge of putting all this together? You have a long history with the Walkinshaw organisation and it was evident pretty quickly that you were happier here.

DOWE: I’ve been around long enough that if I wasn’t enjoying it I wouldn’t be here. Everyone is really cool here. Honestly, it’s not a love fest but it’s pretty darn good.

SPEEDCAFE: You’ve managed some pretty serious motor racing programs around the world in the past. Is the challenge of winning here any different to what you’ve experienced before?

DOWE: It’s no different. The rules of engagement don’t change. What you’ve got to do is remind people that you can’t do it on your own; it’s how you link a lot of things together and you spent lots of time doing that. There is so much work being done that goes unseen. Nobody is backing off, it’s pedal to the metal here.

SPEEDCAFE: Lastly, your wife and daughter are currently in the process of moving to Melbourne from Atlanta. Is Australia home for the long haul now?

DOWE: My family came out here in January to take a look and my daughter in particular has a very good job with a bank in America, (but) she said ‘let’s go for it, let’s do it’. They just had a ball. You wouldn’t bring your family to something that’s not good, put it that way.