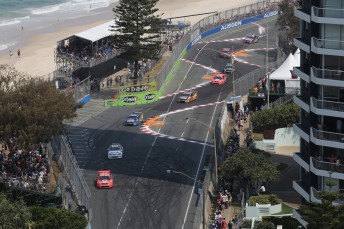 The busy beach chicane at the Gold Coast 600. The Surfers race and street event in Townsville hang in the balance beyond 2013

The future of the V8 Supercar street races on the Gold Coast and in Townsville beyond 2013 remains uncertain after the presentation of the Queensland Government’s annual budget.

The budget, presented by Queensland Treasurer Tim Nicholls, did not include forward projection allocations for the races in 2014 and it is believed that if the events are to continue then Major Events Minister Jann Stuckey will need to find funding in her own stretched budget.

When contacted by Speedcafe.com, Ms Stuckey refused to put a timeline on whether money would be allocated to the two Queensland V8 Supercars races. “Negotiations are continuing,” the minister said.

Sensitive to any major event is the lead time that helps with marketing and promotional activities however the government is in no hurry to put an ultimatum on a decision.

It is believed that the Queensland Government’s contribution for the two events this year is $8 million and $2 million respectively.

It was originally hinted that the Townsville race would survive at the expense of the 23-year-old Gold Coast race, but it would now seem both are in danger of being axed.

Despite the absence of the V8 Supercar events in the projected budget figures, there was a $100 million allocation for works to continue on preparations for the 2018 Gold Coast Commonwealth Games.

One of the first tasks of new V8 Supercar CEO James Warburton was to meet with Stuckey, but those plans were tragically put on hold after the death of Warburton’s father, Richard.