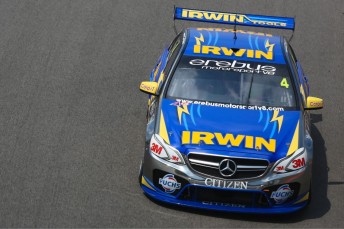 Lee Holdsworth is the highest place Erebus driver in the standings, sitting 20th after 16 races

Erebus Motorsport will today use its first full private test day of the season to find a solution to the steering issues that hampered its campaign in Austin, Texas.

The Lee Holdsworth and Tim Slade driven E63 AMGs both suffered lengthy delays on Saturday at the Circuit of the Americas when their power steering pumps overheated and shut down.

The packaging issue, which had surfaced as early as the Adelaide season opener, was flared by Austin’s high ambient temperatures and can be expected to repeat over the coming Darwin and Townsville events if a solution is not sorted.

The team was allowed a temporary fix for Sunday’s Austin races in the form of a ducting tube that took air to the pump directly from the grill; an area which is usually sealed under the car’s aerodynamic homologation.

“Depending on the results of that we’ll need to get back to V8 Supercar and see what they’ll allow us to do and then see what we can do as a team to solve the problem.”

The AMGs are the only cars in the field to run an electric power steering pump having been granted the concession pre-season alongside the use of a flat-plane crankshaft and the since rescinded freedom of a drive-by-wire throttle.

With its engine package largely set until a second major upgrade arrives from Germany prior to the endurance races, the team is looking forward to a busy day of chassis work.

The hectic early season race schedule ensured that Erebus was one of many teams unable to complete a private test day between the season opening Clipsal 500 and this week.

Like the rookie test day it ran with Maro Engel prior to Barbagallo, the test is taking place at Morgan Park.

“We’re really looking forward to putting the chassis through its paces,” said Stuart.

“We’ve been doing all of our set-up learning at the race tracks so what we really want to do is validate all the changes that we’ve made.

“We’ll be able to back-to-back a lot of things and really hone in on the set-up window for the car, hopefully allowing us to go to Darwin with more confidence about the changes we’re making.”

Although the Hidden Valley circuit’s 1.1km front straight will hurt both the Mercedes and Nissan campaigns, the team is hopeful of a positive showing.

“Depending on what we find (today) I’d like to think that we can be reasonably competitive there, or at least as competitive as we were in Perth,” he said.

“I don’t want to go to Darwin focussed on the result but rather on how we go racing as a team with developing the car.”

Holdsworth is 20th in points after 16 races, four places ahead of Slade and eight ahead of the team’s third driver, German rookie Maro Engel.