Courtney confident of improvement after test

Courtney confident of improvement after test 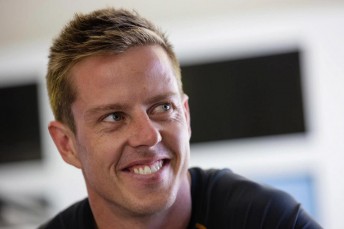 James Courtney is certain that the Holden Racing Team has made a step towards the front of the V8 Supercars field following a busy test day at Winton on Tuesday.

The Holden Racing Team and its stable-mate Supercheap Auto Racing joined Ford Performance Racing at the rural Victorian venue, with the squads enjoying their first test hit-outs since the compulsory pre-season test at Sydney Motorsport Park in February.

The HRT’s form has fluctuated during the opening five events of the season, leaving Courtney and team-mate Garth Tander ninth and seventh in the standings respectively.

“This is the first real test day we’ve had and it’s been an important day to improve our speed so that we’re able to take a better package to Darwin next week and through the middle part of the season,” said Courtney, who attended the test just a day after returning to Australia from an extended stay in the United States.

“Triple Eight and Brad Jones Racing have been the benchmark teams this season but we’re definitely a step closer with what we’ve been testing.

“My HRT Commodore is now the best car I’ve had all season – we’ve definitely improved it.”

Tander said there were “a few things fixed, a few things still to go” following the day in which the two HRT Commodores completed an estimated 600kms of running. 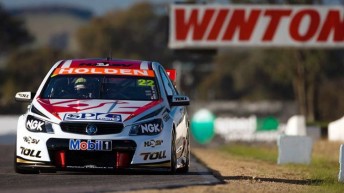 Courtney putting the #22 Holden through its paces

“(The) test was really important as at race meetings it’s hard to develop the car and get the results you’re after,” said Tander.

“These days are like gold and you need to use every second of the day to make sure you’re developing the car.

“We’ve had a solid year of results; we’ve been on the podium, building and getting closer to the front, but we’ve had a couple things holding us back”.

Both drivers are confident that the testing gains will translate to the upcoming Skycity Triple Crown at Hidden Valley, despite starkly different conditions expected in the Top End.

“It’s 10-13 degrees and freezing cold at Winton whereas in Darwin it’ll be 33-34 degrees with the sun shining,” noted Tander.

“It’s hard to replicate those conditions, but testing is more about understanding what you’re doing so when we get to Darwin and find ourselves in certain situations we know what tool to pull out of the tool box and apply it to the car.”

The team’s only confirmed endurance driver Greg Murphy enjoyed his first taste of a new-generation V8 Supercar as part of the test.

Murphy is expected to team with Tander at Sandown, Bathurst and the Gold Coast, with Briton Oliver Gavin in the frame to join Courtney.

Such pairings would leave US-based Australian Ryan Briscoe to share the Supercheap Holden with its regular pilot Russell Ingall.