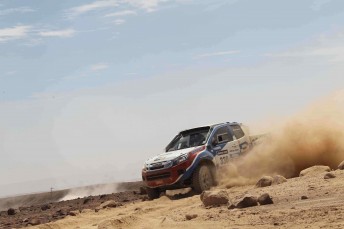 Bruce Garland in action in the Dakar earlier this year. Pic: Willy Weyens

Bruce Garland heads to the Northern Territory this weekend for the iconic offroad Finke Desert Race.

A long-time offroad protagonist, Garland is a regular in the event which is being run for the 38th time.

“I think this is my 14th but I’m not sure – must be senility setting in,” Garland said.

“It’s such a great event. The very worst road in Australia with the very best people. The whole community gets behind it, and I really can’t imagine it could happen anywhere else in the world.”

The Finke Desert Race is an off-road, multi-terrain two-day race for bikes, cars, buggies and quads from Alice Springs to the small Aputula (Finke) community and back again.

Garland and long-time navigator Harry Suzuki are driving the Isuzu Motorsports D-MAX, which they ran in the famous South American Dakar Rally early this year.

The perennial offroad pairing is entered in the Extreme 4WD division, which is for highly modified 4WDs with engines under 7200cc (diesel) or 6000cc (petrol).

“The aim of the exercise is to get down and back with the least amount of pain,” Garland says.

“Any result is a bonus because it truly is a brutal race, wet or dry. And we’re praying for rain as usual, because the D-MAX and our Toyo tyres absolutely excel in the mud.

“King Shocks are bringing out nine engineers from the US to do work with competitors who are using their shocks. I understand one of them is an Indian tribe member, so we plan on asking for some extra help from him. If he can do a rain dance for us, we should be set!”

For the first time in several years, the Finke will not be part of Garland and Suzuki’s preparation for the Dakar Rally.

The pair has no plans to compete in 2014, after a heartbreaking end to this year’s event, with a multitude of issues finally forcing their withdrawal.

“It was a tough start to the year,” Garland says.

The 2013 edition of the Finke Desert Race will attract over 500 competitors across the various two and four wheel classes.

The signature Finke event is the second round in the five-round Australian Off Road Championship.