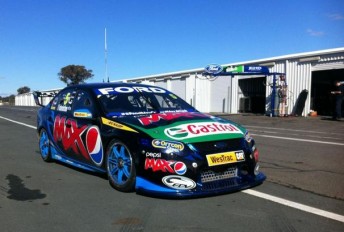 Ford Performance Racing’s four endurance co-drivers enjoyed their first taste of the team’s 2013-specification Falcons in a pre-Darwin hit-out at Winton on Tuesday.

Despite the absence of Mark Winterbottom, who is currently holidaying overseas, the factory Ford outfit had eight drivers cycling through its cars.

Owen was arguably the busiest of all drivers, swapping between Davison’s entry and his regular FPR-built MW Motorsport Dunlop Series mount during the day.

FPR was also sharing the Victorian venue with the Holden Racing Team, which like its Ford rival was undertaking its first test since the compulsory running at Sydney Motorsport Park in mid-February.

“It was good to get some laps and get a feel for the car and the team,” said the experienced Owen at day’s end.

“We did some pit stop practice and some different length stints so it was a busy day.

“I use Will’s belt position and seat insert and I like the way his pedals are set-up so I haven’t changed anything at all which is great.”

Canto, who has not raced since finishing an outstanding second alongside David Reynolds at Bathurst last October, was also left encouraged.

“I was expecting the car to be massively different to the old one but it reacts nicer and it is quite a refined package,” he said.

“That said the tuning window seems to be quite small so it is still a learning curve but I was very impressed.”

According to the team’s engineering manager Matthew Nilsson, improving the team’s pitstops was an area of heavy focus during the test.

“It was a very good day and each car has worked through its program and I am happy we have been able to tick off a lot of items,” he said.

“We worked on a range of areas including car speed, durability and pit stops.

“We tried a lot of things today in relation to pit stops and while they seemed a positive step we will spend the next few days back at the workshop going through all the information.

“Overall it has been a very worthwhile day.”