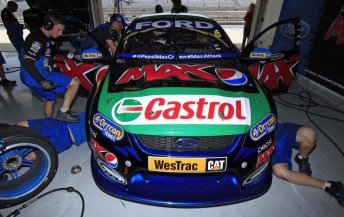 Ford Performance Racing and the Holden Racing Team will today enjoy their first test running since the 2013 season began as they ramp up their efforts to chase down early pace-setters Red Bull and Brad Jones Racing.

The two factory squads have won just one of the season’s first 16 races between them, with Will Davison’s victory in Race 8 at Pukekohe the single triumph.

FPR will have all four of its cars on track for the Winton test, with endurance drivers Steven Richards, Steve Owen, Dean Canto and John McIntyre all having their first taste of the team’s 2013-specification machinery.

Regular pilot Mark Winterbottom will miss the day however due to an overseas family holiday planned prior to a revision to the team’s testing schedule.

Davison, meanwhile, is currently third in points behind Red Bull duo Jamie Whincup and Craig Lowndes and believes the test will be crucial to his title campaign. 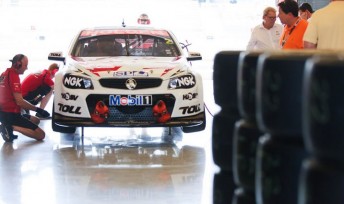 “It’s a pretty important day for us, particularly after a difficult weekend in Austin,” he told Speedcafe.com.

“We’ve been on the fly all year from track to track making lots of changes to the car without too much science to a lot of what we’ve been doing.

“It’s been thinking on our feet and making large changes all the time so it’s good to go testing and re-assess a lot of what we’ve done, as well as test some development items.

“Hopefully we can get some gains on the chassis side of things as well as finding some gains in other areas, like the pitstops.

“There has been a lot of hard work put in by the boys since Austin and there’ll be a lot to get through.”

The HRT is also relishing the opportunity to take to its test venue having shown inconsistent flashes of speed across the opening five events.

A major front-end development was introduced at Barbagallo early last month while an engine upgrade is said to be likely for Hidden Valley.

The day will see the HRT’s only confirmed endurance co-driver Greg Murphy enjoy his first steer of a Car of the Future V8 Supercar.

“With the reduced testing allocation you think long and hard about testing and what you’re going to test,” HRT performance director Tony Dowe told Speedcafe.com when asked of the importance of the day.

“For us it’ll be a day of validation and tuning, for want of a better word.”

Russell Ingall’s Supercheap Auto backed Walkinshaw Racing entry will join its HRT brethren for the day, while the squad’s customer entrant Tony D’Alberto is currently returning from the US and will not run.

Garth Tander is currently the highest placed Walkinshaw Holden driver in the standings in seventh, two places ahead of James Courtney.