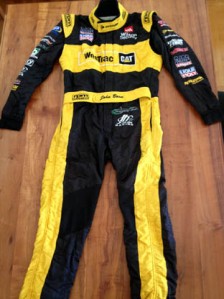 The race suit to be auctioned

Australian motor racing legend John Bowe is auctioning the race suit in which he won the 2011 Touring Car Masters title in order to raise funds for an East Timor-focussed community project.

The 2011 season saw Bowe win the first of back-to-back TCM crowns aboard his self-owned Ford Mustang.

The money raised will be injected into community projects in East Timor as part of a St Joseph’s College Echuca initiative.

A young karter that Bowe mentors, Jess Penn, is involved in the project, prompting the two-time Bathurst winner’s helping hand.

“It’s always nice to help others and I don’t have much to offer other than memorabilia – I can’t sing or dance or anything like that,” he smiled.

“In my racing life it’s a meaningful piece because I won the championship in it and hopefully there are some people out there that will be keen to get their hands on such a good looking suit.”

Bowe is aiming to win a third consecutive TCM title in 2013 and leads the standings by eight points over Jim Richards heading into the third round at Hidden Valley later this month.