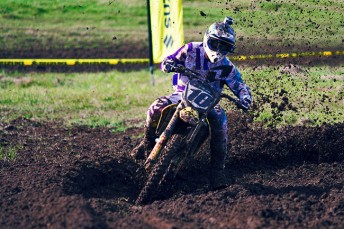 First up Monster Energy MX Nationals MX1 winner, Cody Cooper has led home a Suzuki quinella in Queensland as the national motocross Championship hit the half way point at Conondale on the Sunshine Coast.

The Kiwi led home his team-mate, Matt Moss in the overall pointscore and Scotsman, Billy Mackenzie who was repping a retro Yamaha sticker kit, that celebrated a throwback to 1983.

The difference between the yellow bike mounted team-mates came down to the GoPro SuperPole – Moss had been quickest during regulation qualifying before Cooper leapt ahead of his more experienced team-mate in the fight against the clock.

Cooper managed just sixth in the opening moto, which was won by Championship points leader, Todd Waters (KTM), however changes made to the Motul Pirelli backed machine between races worked – Cooper and his RMZ-450 dominating the second race, setting some of the quickest times of the weekend in the process.

The consistency of Moss was what kept him on the podium. After following Waters home in moto one, he sat behind his team-mate in the second and final race. He survived a scary moment when he came together with Billy Mackenzie mid-air, both were able to continue on.

Mackenzie finished both races in third placing and ended equal on points with Waters at the end of the day. Waters’ fourth placing in the final stanza saw the Scotsman elevate to the podium on countback.

The second placing by Moss has allowed him to close the gap to Waters to 25 points. Waters is still recovering from a concussion sustained at a local (non-Championship) event some weeks ago and will benefit from the six week break between MX Nationals rounds.

Rounding out the top five in a great day for Suzuki was Jake Moss, followed by Lawson Bopping, Kirk Gibbs, Adam Monea, Daniel McCoy and Tye Simmonds rounding out the 10. 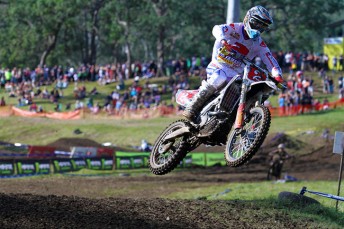 In MX2, Serco Yamaha’s Luke Styke extended his advantage in the category to 50 points after his fourth round victory of the season.

He finished second in the opening moto behind Josh Cachia – who has been one of the real revelations of the season in the second tier category despite battling a wrist injury for much of the season.

Then in the second race, Styke was able to find his way back to clear air and taking the win.

Victorian, Kale Makeham recovered from a disastrous last round to finish the weekend in third overall with third and fifth placed finishes.

Replacing the Pirelli MXD category were senior events, with Cheyne Boyd taking the 30-39 years category from Cam Taylor and Craig Anderson. In the 40-plus category it was Mick Cook from James Deakin and Paul Novak.

The next round of the Monster Energy MX Nationals will be held at Appin (near Campbelltown) in Sydney on July 14.