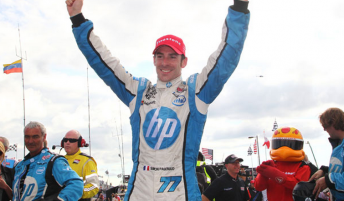 French driver Simon Pagenaud recorded his maiden IndyCar victory after a chaotic Dual in Detroit round of the series.

Pagenaud became the sixth different winner this season by storming away from the field after the race was marred by six caution periods before half-race distance in the 70-lap race at the Belle Isle street track.

He bolted away from the field over the last few laps, timing his run to perfection to beat British drivers James Jakes (Rahal Letterman Lanigan) and Race 1 winner Mike Conway (Dale Coyne Racing).

The Chip Ganassi pair of Scott Dixon and Dario Franchitti managed to pick their way through some wild incidents to finish fourth and fifth.

Marco Andretti was sixth with Helio Castroneves finishing eighth with that pair coming away locked on points at the top of the points table.

Conway began to stalk Jakes over the last three laps as the race for second intensified however the latter managed to stave off the challenge aided by push-to-pass boosts which his pursuer had exhausted.

There was bedlam short of half-race distance when Will Power was tagged by Sebastien Bourdais on the restart after the fifth caution period which triggered a chain reaction involving up to 10 cars filing into turn one on lap 28.

After climbing out of his car, Power stormed down the track on foot with track marshals training to restrain him.

He tossed his gloves at Bourdais in disgust. Bourdais managed to escape the melee as the four-times Champ Car series champion continued to file around under the safety car.

“Double file restarts and Bourdais got into the back of me. What was that guy doing? That’s racing. Bourdais he once was a champ and now he’s a chump,” Power fumed.

Bourdais subsequently served a drive-through penalty for avoidable contact and was eventually classified in 11th.

Ryan Briscoe, stepping into the Panther Racing machine, was caught up in the melee and finished a lap down in 13th position.

More than 20 of the opening 37 laps were running under caution.