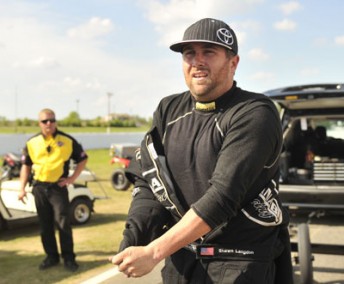 The in-form Shawn Langdon led home the Qatari-owned Al-Anabi Racing sister machine of Khalid alBalooshi, in the first ever one-two for the Middle Eastern backed outfit. In an added bonus to his third win of the season, his second in succession, Langdon has overtaken Tony Schumacher as the NHRA Mello Yello Series points leader.

“From the first round to the final, we’ve made some really strong runs,” said Langdon. “The run wasn’t quite as fast as we were wanting it to be. But the first Al-Anabi Racing team final between alBalooshi and me is a great way to end it.”

The win is a huge coup for the Al Anabi team, funded out of Qatar by motorsport and drag racing enthusiast his Excellency Sheikh Khalid bin Hamad Al Thani and shows the diversity of the NHRA.

Schumacher put in another strong showing to get to the semi-finals in the US Army machine, but was eliminated by alBalooshi, who also accounted for Larry Dixon in the Australian owned Rapisarda Autosport International machine and Dom Lagana.

Dixon qualified 15th quickest, whilst the other Australian in the field, Dave Grubnic missed the bump spot by one placing in a very rare non-qualification. The non-start from Grubnic has pushed him outside the critical top 10 Countdown zone.

To get to the final, Langdon drove past TJ Zizzo, fastest qualifier Clay Millican and Spencer Massey. Brittany Force in the Castrol EDGE fueller had one of her best outings, beating Doug Kalitta to get through to the second round before being eliminated by Massey.

Hagan beat Blake Alexander, Johnny Gray and Tim Wilkerson to get to the final, whilst Beckman got past Chad Head, Cruz Pedregon and Del Worsham.

The win takes Hagan to the points lead by 43 over Johnny Gray.

The win takes his runaway lead in the World Championship to 152 points over last round winner, Jeg Coughlin Jr.

Coughlin was eliminated in the second round by Jason Line – who was Edwards’ semi-final scalp. Others to feel Edwards wrath were Lee Zane and Rodger Brogdon, whilst Johnson’s path to the final saw him account for Larry Morgan, Erica Enders-Stevens and Vincent Nobile.

Michael Ray took his second victory of his young NHRA Pro Stock bike career and first of 2013, moving himself into fourth placing on points.

The youngster beat home Hector Arana Sr in his path to the Wally. Ray took out Mike Berry, John Hall, Shawn Gann in an unusually weak side of the ladder, whilst Arana took care of his son, Hector Arana Jr in a family feud opening round, Eddie Kraewic and Matt Smith.

The battle of the Arana’s in round one could have serious Championship implications, however Hector Jr has extended his points lead to 151 points over Scotty Pollachek – who was a shock non-qualifier.

The next round of the NHRA Mello Yello Series will be the Thunder Valley Nationals conducted at Bristol Dragway, June 14-16.