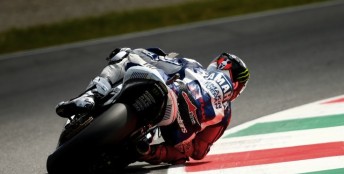 Yamaha’s Jorge Lorenzo closed the gap in the MotoGP title race with a dominant ride to victory in an eventful Italian Grand Prix at Mugello.

Lorenzo led from lights-to-flag but the win was by no means easy as he had to survive immense pressure from Honda’s Dani Pedrosa and Marc Marquez.

However, the Spaniard stayed cool and completed what was in the end a comfortable win in closing to within 12 points of the Championship lead.

The race finished in dramatic circumstances with Marquez crashing out from second with three laps remaining, handing Pedrosa and Monster Yamaha’s Cal Crutchlow well earned spots on the podium.

The expectant Mugello crowd were left subdued as their hero, the multiple world champion Valentino Rossi was involved in an explosive first lap crash. The Yamaha rider was collected by Alvaro Bautista at turn four which speared both riders into the barriers at high speed. Luckily both walked away from the crash unscathed.

Meanwhile at the front, Lorenzo asserted himself in the lead with pole man Pedrosa and Honda team mate Marquez , who stormed up to third with an impressive start. Ducati’s Andrea Dovizioso held fourth ahead of Crutchlow and Nicky Hayden.

The top three soon began to break away from the rest of the field although Crutchlow led the charge to reel them in after he slipped past Dovizioso. Another man on the move was German Stefan Bradl as he grabbed fifth with moves on the Ducati duo of Dovizioso and then Hayden.

Pressure increased on Lorenzo at the front with Pedrosa and Marquez both looking hungry to take the lead. However, lap-after-lap the Yamaha man held firm and he soon managed to put some breathing space between himself and the Honda pair.

A string of blistering laps gave Lorenzo a healthy five second lead and the attention switched to the battle for second. With five laps remaining Marquez made his move and shot past Pedrosa and it seemed the race would finish in this order.

But with just three laps to go Marquez made an uncharacteristic error and he dropped the bike at turn 12 and endured his first DNF of the season.

The accident was his fourth crash of a difficult weekend in Mugello for the rising star.

A gusty last lap secured fourth for Bradl ahead of the Ducati trio of Dovizioso, Hayden and Michele Pirro.

MotoGP heads to Barcelona’s Circuit de Catalunya for round six on June 16.