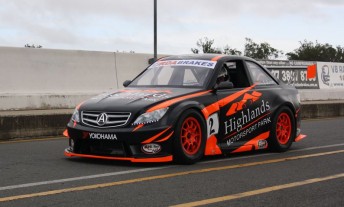 A new body style will be on the grid when the Aussie Racing Series continues at Queensland Raceway next month.

Referred to by the category as ‘Euro GT’, the shape is the seventh to be run in the class and the first not to take the name of a full-sized road car.

Caricature versions of the Holden Cruze, Toyota Aurion, Holden Commodore VY and Ford Falcon AU have all been introduced to the ARC over the last 10 years, joining the original 40s Ford Coupe and Holden FJ shapes.

Category owner Tony Quinn tested the first completed Euro GT at Queensland Raceway last Friday and is expected to be one of up to five drivers to race the new machines in Round 3 of the season at the Ipswich venue on July 27-28.

Reporting a successful first hit-out for the car, which maintains the same running gear as the Cruze models debuted last October, category manager Brad Ward says the arrival of the Euro GT is important for the class’ continued success. 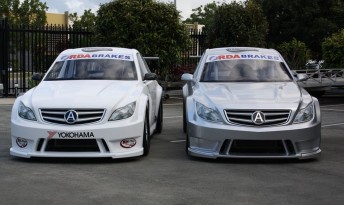 Two of the Euro GTs have already been completed

“Since Tony bought the business last year we’ve been going through a process of growing the category and making it stronger, and one of the ways to do that is to introduce new body shapes,” Ward told Speedcafe.com.

“We’ve built seven new cars over the history of the category and every time we’ve built a new car it has helped to grow the series.”

Although the styling appears to have some resemblance to Mercedes-Benz models, Ward says the manufacturer was not involved in the project.

“We launched the Cruze and the Aurion with full manufacturer support, but we’ve done bodies in the past, such as the Falcon, just because we liked the look of it and wanted to do it,” he said.

“It might look a bit like a Merc but it’s got dive-plates inspired by Tony’s Aston Martin and a rear-wing copied off of Klark Quinn’s Porsche in terms of the mounts and so on. It’s got a bit of everything.”

Ward says that the category hopes to introduce more fresh body styles in the future, although planning for an eighth car is yet to commence.