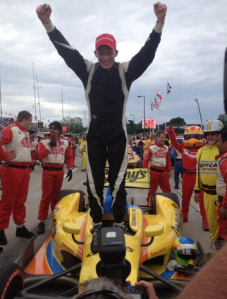 Fresh from watching the Indy 500 last week as a spectator to winning the opening race of the double-header at the bumpy course, super sub Conway beat home Ryan Hunter-Reay (Andretti Autosport).

It was a double podium for the small budget Dale Coyne outfit with the tall British driver Justin Wilson hanging on to claim third.

Conway, who will start the second 70-lap race from pole (tomorrow morning Australian time), had led the early portion of the race before Hunter-Reay swept into the lead.

However Hunter-Reay quickly fell back into the clutches of the chasers as it became clear the drivers who started on the softer red tyres struggled for pace.

Conway, who declared a few seasons ago that he had no desire to race on oval tracks after a huge crash at Indianapolis, will juggle a Le Mans program with what is expected to be more street/road course IndyCar drives.

With Conway having the luxury of some breathing space over the last few laps, Dixon who was on harder compound rubber chased Wilson, who was on the softer red Firestone tyres, in a grandstand finish for the final podium position. However Wilson had to master a defensive strategy to hold the final podium finish.

Earlier Conway dived underneath Hunter-Reay to grab the lead back on lap 44 as the defending series champion’s tyres started to fall away.

Sebastian Saavedra brought out the third full course caution when he became buried in the tyre barrier at turn six around mid-race distance.

When the field began to circulate past the stricken car, Saavedra who had alighted from his stricken machine, flipped a double bird at Marco Andretti who was involved in the incident.

“It’s frustrating to see that Marco keeps doing these dirty moves and nothing happens to him,” Saavedra said with stewards taking no action over the incident.

During the accident a tyre from the barrier came loose with both Target Chip Ganassi cars of Scott Dixon and Dario Franchitti striking the obstacle.

With three laps to go Ryan Briscoe (Panther Racing) ploughed into the barrier bringing out only a local yellow flag. Briscoe was classified in 20th, one place ahead of Andretti who was involved in a clash with Charlie Kimball.

It was small reward for Briscoe who had driven a tidy race for the team which called him up to replace JR Hildebrand.

Helio Castroneves brought home the Penske Chevrolet in fifth and has taken the lead in the points from Hunter-Reay with Andretti, who led going into the opening Detroit race, slipping back to third.

Will Power fought his way to an eighth-place finish  in the #12 Penske.

It was also a massive turnaround for Honda-powered entries filling seven of the top 10 spots after being comprehensively overshadowed by Chevrolet at Indianapolis.