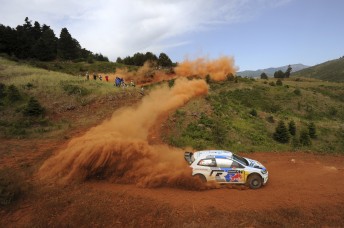 “It’s been by far the best day for me since I joined Volkswagen,” said Latvala.

“We tried to put a lot of pressure on the competition today without risking too much ourselves. Once we were at the front of the pack, it was all about securing our lead and keeping our concentration.

“All in all, we put in a very sound performance and so did our team because our Polo worked perfectly.

“But as I say, the ‘Acropolis’ is unpredictable: we haven’t won yet and we’ll be looking to make it across the finishing line with first place securely in the bag tomorrow.”

The Norwegian held the initiative but drove the morning’s final two stages with no brakes on his Polo R to fall behind the Fiesta of Al Attiyah.

Overnight leader Evgeny Novikov’s flying start came to an abrupt end on SS4 when the Russian brushed a bank which broke the rear-right wheel and consequently damaged the brake disc and suspension of his Ford Fiesta RS WRC.

After fighting back from Day 1 steering issues Mikko Hirvonen twice broke a wheel rim on his Citroen DS3 but persevered to sit eighth overall.

His Citroen teammate Khalid Al Qassimi had not such luck, exiting the road on SS8 forcing his Citroen into a roll and damaging the roll cage, retiring from the event.