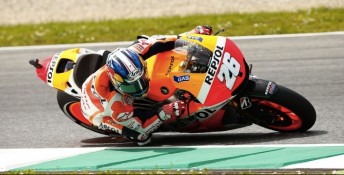 Yamaha’s Lorenzo had ridden superbly throughout the Italian Grand Prix qualifying session setting two lap records. However, a last gasp effort from Pedrosa saw him climb from seventh to pip Lorenzo in a frantic final minute of the session.

Injured Andrea Dovizioso gave the home crowd something to cheer by guiding his Ducati to third and the final spot on the front row.

But multiple world champion and local hero Valentino Rossi could only manage to post a time good enough for seventh spot, a full seven tenths of a second behind Pedrosa.

Lorenzo set the pace from the outset with an impressive 1:47.621s lap with Monster Yamaha’s Cal Crutchlow in second ahead of Stefan Bradl and Ducati’s Nicky Hayden.

The order soon changed when the riders completed their second run with Lorenzo going even quicker, while Marc Marquez, who was forced to come through qualifying 1 to secure a shootout place, shot to second.

The US Grand Prix winner has struggled in Italy this weekend, escaping serious injury from high speed crashes in free practice.

Drama struck minutes later when Crutchlow dropped his Monster Yamaha but he managed to return to the pits and jump on his spare bike. He wasted little time when he rejoined the session, as he moved into third, knocking Rossi off the provisional front row.

In the end Crutchlow was demoted to fourth while Bradl moved into fifth leaving Marquez in sixth with Rossi shuffled back to seventh.

Australia’s Bryan Staring will start from 22nd place on the grid as he continues to improve on his CRT Honda. Elsewhere, Ben Spies has pulled out of the weekend due to injury.