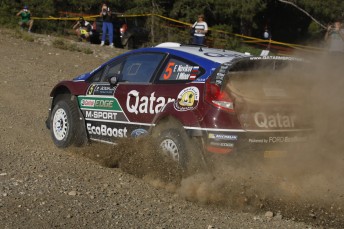 Russian youngster Evgeny Novikov has taken a half a minute lead after Day 1 of the Acropolis Rally of Greece – Round 6 of the FIA World Rally Championship.

The Qatar M-Sport World Rally Team driver was in his element all day setting the fastest stage times on the opening two tests overnight.

“I am very satisfied with today. We tried to keep a good rhythm and maintain good speed from the start and it looks like that has worked well,” said Novikov.

“We had no problems and no big moments. There was some dust on the first stage [SS1], not everywhere, but in some of the slow sections, and then we made a small mistake under braking on SS2 so I think that we could have gone quicker in places.

“I know this rally quite well – this is my fifth time here now – so maybe that helps a little. To be leading is a great feeling, and I hope that it continues! For tomorrow I will just try to keep this good rhythm, watch the splits and continue this good form.”

World Rally Championship leader Sebastien Ogier had a less than desirable start to the Greek event retiring from the opening stage of the event with a fuel pressure problem on his Polo WRC. Ogier will restart the Rally Greece under the Rally 2 rule tomorrow.

Citroen driver Mikko Hirvonen was caught up in an issue filled SS1 which at 47.7km in length is one of the longest stages in the WRC.

Hirvonen developed steering issues while Norwegian Mads Ostberg ripped off a wheel in the harsh and rocky conditions. Both drivers fought back on the second and final stage of the day but still remain well down the order.

Former F1 driver Robert Kubica continues to impress on the rallying scene as he leads the WRC2 category and is 10th overall on the timesheets.