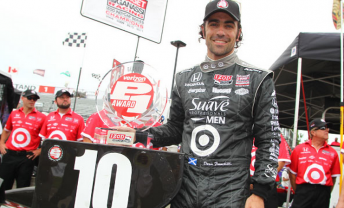 Dario Franchitti nabs pole but will start from 11th

Dario Franchitti has registered the fastest time for the first of the double-header races at the Detroit IndyCar Grand Prix but will hand the pole to EJ Viso.

Franchitti drops 10 grid spots and will start from 11th after an unapproved engine change at Indianapolis last week.

The Chip Ganassi driver will keep the bonus point for the pole and the cash prize after clocking 1:19.3311s with Viso second fastest in 1:19.5572s.

Franchitti also received a drive through in the Fast Six part of qualifying for a blend line breach.

Mike Conway was a surprise in finishing third in the Dale Coyne Racing car ahead of James Jakes with Ryan Hunter-Reay and Alex Tagliani next.

The first phase of qualifying was held on a wet track which began to dry out through the run.

Ryan Briscoe will start from 22nd after being called up to replace JR Hildebrand in the National Guard entry for Panther Racing.

His Australian compatriot Will Power will start from 10th in an indifferent qualifying run for the Penske team.

Power’s team-mate Helio Castroneves spun out in the second phase of qualifying bringing out the yellow flags and will start from 12th.

The grid for the second race at the Dual in Detroit meeting will feature a separate qualifying session.