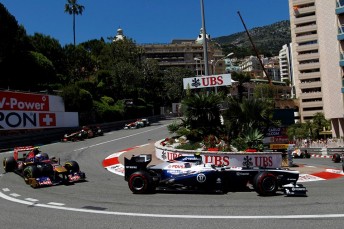 Williams and Toro Rosso have both confirmed engine changes for 2014

The make-up of Formula 1’s 2014 grid has become clearer with Williams and Toro Rosso both confirming new engine deals for the start of the 1.6 litre era.

The news follows confirmation from McLaren that it will continue with Mercedes for one more season before beginning a new Honda deal in 2015.

Williams’ switch is understood to have been partially motivated by money, with the Mercedes units said to be significantly cheaper than Renault’s.

“Securing the right engine supply partnership is a key milestone in the implementation of our strategy for long-term success,” said Williams’ deputy team principal Claire Williams upon announcing the new agreement.

“We are also pleased to conclude this agreement early in the season and we very much look forward to working with Mercedes in developing our 2014 race car.”

Lotus’ future now remains the key question mark, with its current supplier Renault having made noises about only wanting to supply three teams .

Caterham is expected to continue using Renaults next season as part of a strategic partnership that stretches across the two companies’ road car divisions.

A statement from Renault in the wake of yesterday’s Williams announcement hinted that it will likely stretch to supply four squads in 2014.

‘For Renault Sport F1, we have stated on numerous occasions that we would supply up to five teams if there was a requirement to do so, but this would not make sense economically or be ideal for our resources,” it read.

“Three, or up to four, teams is the ideal for us so the departure of Williams normalizes the situation and makes things much clearer from our side.

“We will announce the next team within a matter of days, and then confirm the final stage before the end of June.”

At the tail of the field, Marussia is expected to switch from Cosworth to Ferrari engines next year with the former electing against developing its own 1.6 litre unit.