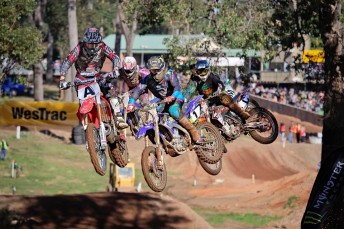 A strong field of international racers will fight it out for the huge prize pool on offer against Australia’s best at the Matrix Equipment Hire Manjimup 15,000 Motocross across June 7-9.

Leading the way will be American Weston Peick. He finished the American Supercross season with five top 10s, including a seventh in Vegas and more recently was the first privateer home at the Hangtown outdoor event. Joining him at the venue which hosted the MX des Nations some years ago will be fellow American Travis Freistat along with Englishman, Jamie Law.

They will be up against some of the MX Nationals regulars Todd Waters, Kirk Gibbs, Luke Davis and multiple Australian Champion, Jay Marmont.

Local star, Dean Porter is anticipated to start if he is declared fit enough after a recent injury.

Last year’s event was won by Englishman, Brad Anderson who won three out of the four races in the All Star category, which is a combination of MX1 and MX2 rules as seen in the Monster Energy MX Nationals.

Friday is an open practice day for all competitors, Saturday is race day for the Juniors and Sunday is the big event for the All Stars, with all competitors duking it out for the $20,000 in prizemoney on offer. Racing is from 9am each day.