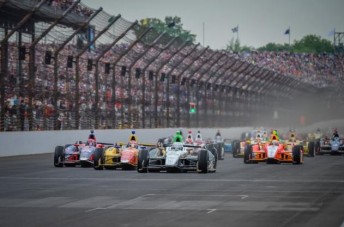 The IndyCar field starts the Indianapolis 500 at the weekend

The Izod IndyCar Series is looking to return an Australian event to its schedule as part of a rejuvenated push into international markets.

The category has not visited Australian soil since October, 2008, when a non-points paying race concluded the IndyCar schedule on Queensland’s Gold Coast.

Despite being preceded by almost two decades of American open-wheel races at the venue, the then recently merged IndyCar/Champ Car series elected not to return to Australia for 2009 as it focussed on rebuilding its following in North America.

The class has enjoyed a strong Australian involvement in recent years regardless, with drivers Will Power and Ryan Briscoe both having contended for the title with powerhouse squad Team Penske.

American open-wheel racing sage Derrick Walker, who is soon to take up the president of competition role at IndyCar, told Speedcafe.com in Indianapolis that the championship is seeking a local partner to return the class Down Under.

Walker has strong ties to Australia and will be giving up a long-time management stake in Power’s career when he steps into his position with IndyCar.

“We want to go where people want to watch what we’re doing and want to see our show,” he said when asked of interest in an Australian fixture.

“It’s always a commercial struggle paying to go there, but I think IndyCar needs an international portion of its schedule and we’re going to go that way (adding more events outside of North America).

“We’re looking for places that make sense internationally for a limited number of races and if we can find them (an event partner in Australia), why couldn’t Australia be one of those locations again?

“It worked for many, many years and was one of the favourite events of IndyCar. It was a great race.”

Returning to the Gold Coast itself appears highly unlikely with the Queensland government this week expected to pull much of its current $8 million funding for the Surfers Paradise street race, which has operated as a V8 Supercars meeting since IndyCar’s departure.

Bringing the IndyCars to Australia had previously cost Queensland tax payers in the region of $14 million.

A Sao Paulo street race is currently the only IndyCar event held outside of North America, with 14 events in the United States and a single hit-out in Canada.

Walker says that the latter part of the schedule – where the Gold Coast race sat prior to its demise – remains the ideal timing for racing beyond North American borders.

“When you look at racing internationally it makes a lot more sense to do it in the off-beat times,” he said, noting that IndyCar is currently undertaking “a lot of research into the schedule”.

“The middle of the year should be in America, but towards the end when the football cranks up you’re better off not being in the US.”

Event timing had played its part in IndyCar’s departure from the Gold Coast, with series bosses having pushed for a switch to an early season date – a position it had filled from 1991 through 1997.