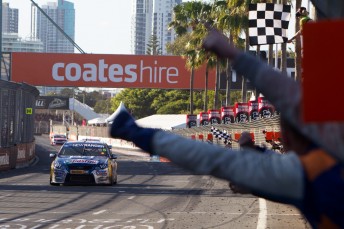 Incoming V8 Supercars chief executive James Warburton will hold an urgent meeting with the Queensland government next week as the Gold Coast 600 race faces a dim future amid financial cutbacks.

A report in the Gold Coast Bulletin newspaper claims the state government is set to dramatically slash the $7 million in annual funding for the race.

Speedcafe.com believes the figure is closer to $8 million and that the Government is looking at a reduction to somewhere around $3.5 million with suggestions that the Gold Coast City Council will be called upon to fill the shortfall – which remains an unlikely option.

The Armor All Gold Coast 600 street race comes to the end of its contract in October and the event’s future is hanging in the balance.

V8 Supercars took over the Surfers Paradise street race following the departure of CART/IndyCars and the no-show of the American open wheeler’s successor, the A1 GP series in 2009. The cost to stage the race in the IndyCar days was close to $14 million a year.

The sport’s managers maintain negotiations are continuing on the eve of the Newman LNP government handing down its second state budget next week.

There is no indication that cutbacks will be made to the Townsville street race at Reid Park and the Queensland Raceway round of V8 Supercars.

The government spend on Townsville is more than $2 million annually while the Ipswich event is granted $300,000.

Contracts also come to an end on Townsville and Queensland Raceway this year.

V8 Supercars confirmed that Warburton will be holding a priority meeting with the government once he officially takes up the role as the sport’s new chief executive next week. It is assumed that newly appointed government and key stakeholder relationship manager and former acting CEO Shane Howard will also be involved in the discussions.

“What has been reported is pure speculation. We are in the midst of discussions with the government with a view to moving beyond 2013,” a V8 Supercars spokesperson said.

The GC 600 is a showcase event for the V8 Supercars Championship Series and will serve as a body blow for the sport if the race is discontinued after 2013.

The event pumps an estimated $45 million into the Gold Coast economy.

At the launch of the 2012 event in the middle of last year tourism minister Jann Stuckey said that the government was aware of making tourism one of the four pillars that it took to the election.

V8 Supercars is treading delicately over the subject, mindful that the Gold Coast remains a vital signature race on their calendar.