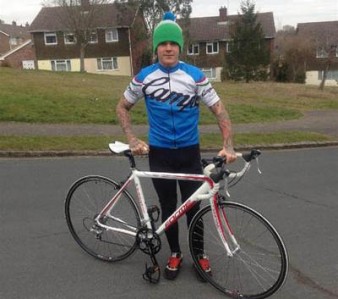 Winner of the Czech Speedway Grand Prix, Tai Woffinden is taking an alternative mode of transport to Cardiff for the British Grand Prix, cycling from Wolverhampton  to raise money for Cancer Research UK.

Woffinden lost his father Rob to cancer in 2010 and has worked tirelessly to re-gain a position in the Grand Prix Series after his opening season in the World Championship, which was also in 2010.

He will have the additional surge of support from Great Britain behind him when he takes to the Millennium Stadium temporary track in Speedway’s most prestigious event this weekend.

Fervour for the youngster has grown significantly this year, aided and abetted by his emotional win in the British Championship – at Wolverhampton – and coming in off the back of his first ever Grand Prix victory in Prague two weeks ago.

It could be fair to say that the 24-year-old will have the support of two nations. Upon his father’s retirement from Speedway competition, the Woffinden family spent much of their time in Perth and Tai was brought up in the West Australian capital. The fiercely parochial West Australian speedway fraternity consider Woffinden one of their own despite him making the decision to ride under the Union Jack.

His victory at the Marketa Stadium in Prague saw him become the first Englishman to win a Speedway Grand Prix since Chris Harris won at Cardiff in 2010. Australian World Champion, Chris Holder is the defending Champion in Cardiff and has won two Grands Prix at the venue.

The British Grand Prix held this Saturday British time (June 1) is the fifth round of the 2013 FIM World Speedway Championship. Woffinden sits one point off the Championship lead. Holder sits in sixth place, 15 points from leader, Emil Sayfutdinov.

Queenslander and permanent Championship contender, Darcy Ward will miss his second consecutive Grand Prix due to injury sustained in Sweden at the third round of the Title chase.