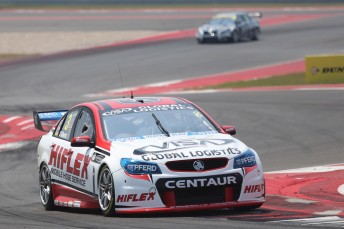 Tony D’Alberto in action at the Circuit of the Americas in Austin, Texas

Team HIFLEX, the sole single car operation in the V8 Supercars field, refuses to apportion blame on its sliding results on the technical alliance with Walkinshaw Racing.

Speaking candidly about the outfit’s slip from a promising season opening in Adelaide, team principal Al D’Alberto defended his decision to re-form a technical partnership with Walkinshaw.

“(moving back to WR) was done after a fair bit of consideration,” D’Alberto said.

The team began its 2013 campaign crisply after the Clipsal 500 finishing in the top 10 but the #3 Commodore driven by Tony D’Alberto has slumped back to 18th after the four events run to date.

“Although we are not there yet I think with Steve Hallam as the managing director at Walkinshaw there is no reason why this relationship could not be even better.”

The Walkinshaw-run Holden Racing Team are experiencing a long form slump having not won since the 2011 Bathurst 1000.

D’Alberto says he remains confident that his team, which runs out of the Melbourne suburb of Knoxfield, can reverse its stocks and become a top 10 threat as the season advances.

“We have made some mistakes but not all of them have been of our own making,” D’Alberto said.

“We’ve made some changes over the first few events and I’m confident as the year goes on we will start to see the results of all our team’s hard work.”

Poignantly, it only takes a miniscule element here or there for a team to tumble off the radar screens in the competitive V8 environment of the new generation cars.

“It’s easy to forget that this is an incredibly competitive Championship and you only need to be a little bit off to look a long way off,” the team boss said.

“We are the only single car team in the field and that makes it even more remarkable that we can at times achieve top 10 qualifying and race finishes.”