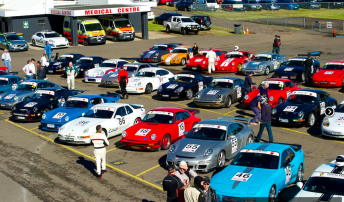 Porsche Australia is keen to continue the Rennsport concept but intends to carefully plan when to revisit the next extravaganza.

The Rennsport meeting was a resounding success with the special shared driver format and twin one-hour heats forming round three of the Australian Carrera Cup Championship at Sydney Motorsport Park.

Porsche has ruled out the Rennsport meeting being held annually and is possibly leaning toward holding it every three years.

“It is something we would do again if we could,” Paul Ellis, PR manager for Porsche Cars Australia, told Speedcafe.com

“The question is how often we do it. This is a special event and given its uniqueness you really can’t do it every year. You want people to look forward to the event.

“It’s possible to do it as an annual event and have it as the showcase round but you probably would have greater success if you didn’t do it annually because there would be more interest and desire and keenness for people to all get to the next event.

“It is something that is super special so we will think long and hard about the time in between Rennsport events.”

Porsche was pleased with the outcome of the meeting with the Carrera Cup round won by the Max Twigg/Luke Youlden combination.

“Cost and logistics are a factor (referring to the Rennsport concept) but also the rewards are great too because your customers are getting more track time,” Ellis said.

“In the case of Carrera Cup you have got two one-hour races and we have got a new shared driver format which is exciting.

“The GT3 Cup guys also get good track time and they can also get a good look at the Carrera Cup guys.

“Then you have all our other motorsport customers who get to share the track and all the activities.

“It’s all about the spirit of Porsche. It’s been very successful and we’ve been overwhelmed by how many people have turned up with their Porsches.”

More than 240 Porsches competed over the weekend with a further 120 on display while another 50 or 60 were displayed in the car park.

Porsche has flagged its intention to move the Rennsport event to other racetracks around the country.