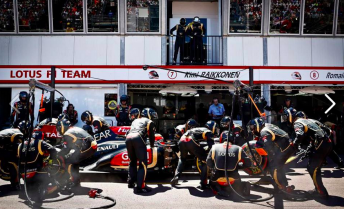 Public accounts reveal that the Lotus F1 team posted an $87.75 million after-tax loss for 2012 which is reputed to be the biggest in grand prix racing history.

The Telegraph newspaper in the UK has quoted publicly available account records which list Lotus as having posted a net loss of $56.27 million with revenue plummeting almost 20 per cent.

The Lotus blow exceeds that suffered by F1 minnow Marussia, which posted a $72.53 million after-tax loss in 2011.

An increasingly difficult sponsorship market remains the number one reason that Lotus is reeling.

It also went on a staff recruiting drive last year including courting star driver Kimi Raikkonen who led the team to victory in the Australian GP earlier this year along with a string of podium places.

Lotus, who has more than 500 people on its books is owned by Genii Capital, a financial advisory and investment firm based in Luxembourg.

Genii Capital reportedly shed a small percentage of its ownership in the outfit to British property king Andrew Ruhan a few months ago.

There are trying times ahead for the Enstone team which could lose the services of Raikkonen at the end of the year. Raikkonen, the 2007 World Champion, has been strongly linked to a switch to Red Bull in 2014.