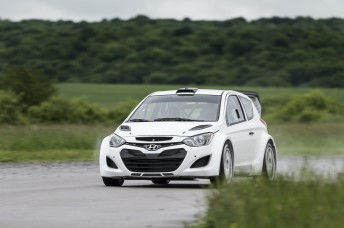 The Hyundai i20 WRC in testing

Hyundai’s push into the 2014 World Rally Championship has gained momentum with testing of the i20 in Germany.

After an intensive few months of preparation at its Alzenau headquarters, Hyundai Motorsport took the latest specification WRC version of the i20 through a shakedown and a full 550km comprehensive testing session where the team started working on different set-up solutions and gathered data.

Although Hyundai would not confirm who was driving, all key areas of the car’s performance were evaluated, there was a major focus on collecting feedback on the i20 WRC’s 1.6 litre turbocharged engine as part of the continuing development programme for the powertrain.

“The learning from the first tests for me is quite positive,” said Hyundai Motorsport Team Principal Michel Nandan.

“I think we are starting from a good base that we can use to carry on working. This was crucial considering the tight schedule we have until the end of the year. We have now a lot of useful feedback to digest for the next steps of our preparation.

“We have an intensive testing schedule for the rest of 2013 which will take us to different venues across Europe, to evaluate the i20 WRC in different conditions and on different terrains which reflect the variety of circumstances we will encounter in the World Rally Championship next year.

“We are not disclosing our specific test venues or the names of the various drivers we will have but we will ensure that every aspect of the car’s performance is put to the test and thoroughly evaluated without leaving anything to chance.”

With an ambitious target to meet in a short period of time, the intensive testing programme is intended to ensure that Hyundai Motorsport arrives at Rallye Monte-Carlo in January fully prepared for the challenge.