An inside look at the latest rally contender

An inside look at the latest rally contender 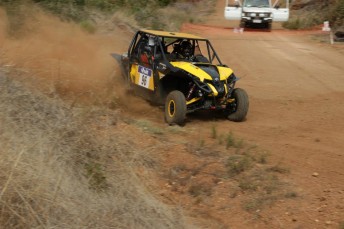 Speedcafe.com recently sampled the latest in side-by-side (SxS) technology as used in the Australian Rally Championship (ARC) in forests north of Auckland as a part of BRP’s 2013 Can-Am product launch.

After a promising 2012 season contesting the ARC’s latest category, 2013 sees the return of the Can-Am factory squad, only this time with a weapon of championship winning potential.

Advancing from the Commander model the Can-Am brand has released the eye-popping Maverick range of which three will be contesting the SxS Rally Challenge series this season.

“My role within the Can-Am team in fact goes well beyond the ARC,” Guest told Speedcafe.com.

“BRP has brought me on as a brand ambassador; it works perfectly as when I’m not racing the Can-Am SSV I’m out using BRP products in the filming I do for my new ‘Reel Action’ TV series or with ‘Escape with ET’.

“Specific to the ARC, the units are reasonably stock. The standard geometry is fantastic and it’s just a matter of making small adjustments. When I was rallying at an international level, and in general throughout my career, I took the role as suspension and development engineer. This is a part of rallying I really enjoy.

Round 1 of the SxS Rally Challenge didn’t go quite to plan for the Can-Am factory squad when the team hit the ground running at the Quit Forest Rally in Western Australia in April.

The Can-Am Mavrick certainly proved itself as a championship contender straight out of the box, however a faulty belt put the fairytale debut of the Maverick 1000R X rs machine to rest, as Guest explained.

“Out of the gate I was winning stages and the Can-Am Maverick clearly proved that it has exceptional pace,” said Guest. “But to be honest, we received the all-new Can-Am Maverick just before Perth, so I was not able to spend many hours at all behind the wheel, or give tyres any consideration. The Maverick is an entirely new platform from Can-Am, it is a very different machine to the Can-Am Commander I raced last year which is really a farming machine that happens to have fantastic handling along with a strong engine.

“Unlike the more utility focused Commander, the Maverick is a purebred rec-sport machine. The SSV’s run a CVT transmission, and in Perth unfortunately we had a problem with a faulty belt. The belt is simple product that is easy to replace, however with the issue mid-stage it meant I couldn’t finish the event.”

Guest will have his hands full in the 2013 SxS Rally Challenge however, with main rival and former ARC and APRC winner Cody Crocker once again playing a similar role for the factory Polaris squad.

Crocker currently leads the 2013 SxS Rally Challenge and Guest knows it will take a strong and consistent performance over the remaining three rounds to get the better of his experienced opposition.

“I’ve known Cody for a long time and mostly we’ve been driving for different manufacturers. I did drive Cody’s Impreza in the 1998 Rally of New Zealand for Possum Bourne Motorsport and had a fantastic victory in the World Production round,” Guest added.

“Rallying is really no different to any other motorsport where the goal is to win. Unlike circuit racing we don’t rub panels and our speed is judged on our own through the forest. This allows drivers to keep a good relationship but nobody wants to come second. Cody and I are both passionate about the SxS championship and continue to work together to grow the category.

“To beat Cody this year I need to win the next three rallies. It was disappointing not to take points away from Western Australia (Round 1) and all I can do is concentrate on trying to finish on top of the podium in the next three events.”

Unlike their tin-top counterparts in the ARC the SxS category is still gaining momentum as the style of vehicle continues to build its global awareness.

While competitors in the market, both Can-Am and Polaris have been working together to create this exciting new category for both the viewing pleasure of spectators and to enhance the market of their sporty product.

Regional General Manager for BRP Asia-Pacific, Gregoire Dupont spoke of the need to work together with Polaris to create long term benefits for both the side-by-side market and the category within the ARC.

“BRP and Polaris are arguably the two most significant players worldwide in the high end SSV segment, with both brands being committed to the ARC Side-by-Side Rally series along with having great ambassadors such as Michael Guest and Cody Crocker, we have established an excellent platform to showcase the new generation of SSV’s,” Dupont told Speedcafe.com

“A key aspect is raising awareness of the SSV category, as well as the Can-Am brand itself. As the ARC SSV Rally Challenge is essentially a stock class, it also gives power-sport enthusiasts a new opportunity to get personally involved in racing.

“The entry cost is significantly less than what is typically associated with traditional rally, yet the fun factor is certainly there and it’s about driving skills opposed to cheque-book racing. We also think privateers will like the challenge of going go toe-to-toe with the likes of Michael or Cody on a level playing field.

“Studies in recent years have shown that Can-Am leads the off-road ATV market in customer satisfaction, however BRP is a young company and we plan to further increase awareness. Initiatives such as the ARC Australian Side-by-Side Rally Challenge plays a role in helping us not only build new sport-rec markets, but also plays a role in raising the profile and general awareness of the Can-Am brand.” Dupont added.

With the ARC making a comeback and taking steps in the right direction to once again become one of the premier motorsport categories on the Aussie calendar, Can-Am’s involvement in the SxS series is a long-term commitment.

“BRP is committed to long-term partnerships. We have established a fantastic platform with the ARC, however we have much to still achieve,” said Dupont.

“BRP has shown a very strong commitment to the SSV category, the rapid release of SSV models in the last three years, including the Can-Am Commander family and the new Maverick is testament to this fact. We are also committed to the development of markets in the Asia-Pacific region, and the ARC Side-by-Side Rally Challenge is providing positive awareness to this new and exciting category.

“What was achieved in 2012, our first year with the ARC, was significant. Although we were racing our utility aligned Can-Am Commander, we are confident the level of professionalism and performance raised more than a few eyebrows in showcasing what the Can-Am machines are capable of. Producing 101hp out of the box and a providing a new benchmark for SSV sports-handling, the Can-Am Maverick is sure to take things to whole new level.

“Whether you’re a power-sport fan, or an enthusiast who wants to get behind the wheel as a privateer, we hope to see your support of the ARC Side-by-Side Rally Challenge and in our dealerships taking a first hand look at the Can-Am products.” Dupont concluded.

As we headed into the Woodhill forest & Muriwai beach loop north of Auckland, Speedcafe.com immediately took control of the 1000cc Can-Am Mavrick, the same piece of monstrous machinery its factory squad are using to challenge for the 2013 ARC SxS Rally Challenge crown.

While this was not the ARC-spec SxS, Guest assured Speedcafe.com that the only changes made to the rally-going version were minimal and in no way was power influenced.

“My Can-Am Maverick factory machine for the ARC is very close to a standard unit straight off the showroom floor. This is the real beauty of the series,” said Guest.

“To get the SSV’s ready for racing they do need to meet the basic CAM’s safety standards. This means a compliant roll cage must be fitted. In addition we have the basic rally modifications including specific race seats and harnesses, a trip computer and fire extinguisher. We even use the standard tyres and wheels with just a change to the brake pad material.

“The Can-Am Maverick is set-up to tackle challenging off-road conditions; however we are primarily racing on smoother hard pack fire trails in the ARC. The Maverick comes standard with adjustable height suspension, and we run it low to adjust for the courses we race on.

“We have also adjusted the springs to go with a stiffer option. For racing this is ideal, however if I wanted to have fun on off-road tracks on the weekend I would run the Maverick with its more standard set-up which suits the really rough stuff better. The standard Maverick is designed to work well in a varying range of conditions from sand dunes to deep, rutted and muddy conditions.

“Whilst we do not make many changes to the unit, we ensure the minor modifications are done properly. Using my connections in the industry, BRP is using Neal Bates Motorsport and they have been responsible for delivering aspects such as the roll-cage on my Can-Am Maverick.”

“You can get racing against me or Cody Crocker in a machine that will be competitive, and very cost effective. The new SSV series is the first time this has ever been possible, and I really encourage people who are interested in getting involved in motorsport to consider it – split the driving, navigating and costs with a mate and your will have a blast.”

From the moment the foot hit the floor the Maverick’s rally DNA was unquestionable. The pure engine noise alone, generated by the 976cc, 101-hp (75 kW) Rotax 1000R V-Twin engine had us sold as it was perfectly accompanied by the model’s electronic throttle-by-wire system, dual exhaust and Continuously Variable Transmission system.

Tearing through pine-tree clad forest stages it was clear that the Maverick was built to go astonishingly fast on a loose surface. So much so that what was once a terrifying trunk of mass destruction either side of the track seemed a distant memory as we rocked through narrow forest roads in excess of 100km/h.

Not as if we needed to be sold on the Maverick after the initial test, the Cam-Am team then unleashed the group on a range of competitor products only to reinforce the dominance of this produce and it’s evolution and innovation.

Aside from a lone Polaris Ranger the big name competitors were left for dead. And it’s this clear comparison of quality over quantity that puts Side-by-Side racing in good stead as it heads deeper into the loose surface world of motorsport.

Round 2 of the SxS Rally Challenge takes crews to the Sunshine Coast for the International Rally of Queensland – 12th – 14th July.