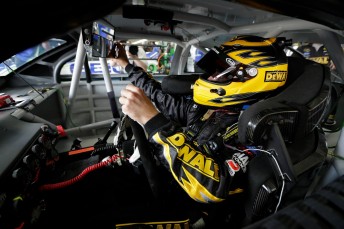 Ambrose had his brakes severed by the TV camera cable

A strange incident has stopped the Coke 600 in Charlotte, with Australia’s Marcos Ambrose in the middle of the drama.

A nylon cable that supports the camera which hovers above the front straight came free and fell onto the track.

The race was immediately stopped and crews were able to make repairs under the red flag conditions. NASCAR also decided that a re-start would be for the positions prior to the incident. 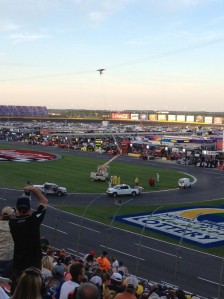 Ambrose who has had a tough run of late, got some luck with the decision as he was able to make back up the two laps he lost when he first came to the pits with the broken brake line. It also allowed Ambrose a two lap on-track test to make sure the brakes were fully operational.

The race was red-flagged on lap 127 of the 400-lap event. The camera cables are held up by a crane outside the grandstands of Turn 4. The camera then slides on cables above pit road.
Busch was livid with the damage to his car.

“My tyre wall, my interior crush panel is broke apart – this (expletive) car is killed,” Busch told his team over its radio.

The debris from the cable also injured 10 spectators in the stands. Seven were treated at the track, while three people were transported to hospital for further assessment. None of the injuries were life threatening.

The race was re-started with Busch in first and Ambrose on the lead lap in 20th.

VIDEO OF THE INCIDENT