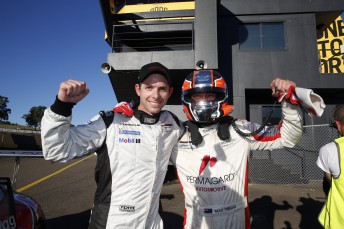 Max Twigg and Luke Youlden won a gripping Race 2 to seal the third round of the Australian Carrera Cup Championship at the Porsche Rennsport Festival of Motor Racing at Sydney Motorsport Park.

In the thrilling conclusion, Twigg held his nerve in a brilliant drive in which he and Youlden shared the #8 Permagard Automotive machine for the one-hour event.

It was a thrilling final segment to the race following the mandatory pit stops with Twigg taking command before he surrendered the lead to a hard-charging Michael Patrizi.

“Max did a good job. I’m just glad I’ve held up my end of the bargain,” Youlden said as the clock counted down.

The #29 Ausdrill car Patrizi was sharing with three-times World Superbike Champion Troy Bayliss edged to a clear lead but in the closing minutes of the race the car slowed with a gearbox drama, letting Twigg back into the lead.

Patrizi crossed the line in fifth position, a gut-wrenching result considering he was setting sail for victory. It was one place behind the fast finishing Earl Bamber who did the last stint after taking over from Stephen Grove in the #4 Grove Group car.

Penny had driven a sound race after taking over from Championship front-runner Baird and looked racy at times against Twigg before ultimately finishing sixth.

“There was a few co-drivers out there which helped me make up some ground,” Baird said after his charging start.

“It was important for us to try to build a gap. And then watching someone else use your car is difficult. But John (Penny) has done a good job.

“I wasn’t happy after qualifying but I was probably over driving it.”

“It was just a matter of getting the most points and getting out of here. We were never going to win the round.”

At the start Gowans led from Youlden with Baird hounding the pair in third but by the start of the second tour Youlden had gained the advantage.

Tim Slade worked his way into fourth position with less than 10 minutes to go until the pit stop window opened. Slade began ninth and was on a mission before handing over the #9 Hallmarc car to Marc Cini. The pair eventually finished 16th.

Theo Koundouris was the first of the stoppers but missed his pit bay which complicated the driver change for Steve Richards and the crew of the Laser Plumbing & Electrical #12 car.

The Koundouris stop was the start of a flurry of pit activity for cars which started with Elite drivers. The Pro drivers delayed their stops until as late as possible, maximising their amount of seat time before handing over to their co-drivers in the Pro-Am style format.

Steve Owen, sharing with James Koundouris in the #47 Supabarn Supermarkets car, flirted with the end of the window, coming in right at the death before handing over to his Elite co-driver. Koundouris ultimately finished 10th.