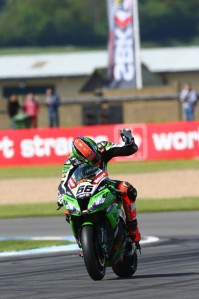 Britain’s Tom Sykes boosted his World Superbike title hopes as he completed a commanding lights-to-flag victory in race one at Donington Park.

The Kawasaki rider, who started from pole, produced a faultless ride to take the chequered flag and give the partisan crowd plenty to cheer about. While Sykes enjoyed a trouble free run, there was plenty of action behind with Marco Melandri fighting his way to second ahead of championship leader Sylvain Guintoli, who completed the podium.

However, Sykes lost the lead at the start with Guintoli reacting best to the lights and he led the field as they streamed into Redgate for the first time. But it didn’t take long for Sykes to recover the lead with a slick move through the ultra fast Craner curves.

The big loser at the start was Fixi Crescent Suzuki’s leon Camier as he dropped from fifth to 13th position. His race went from bad to worse with a race ending crash a lap later.

At the front, Pata Honda rider Jonathan Rea slotted into second passed Guintoli with Eugene Laverty in fourth. The top two began to break away from the rest of the pack with the race victory seemingly a battle between the Brits.

Further down the field Laverty’s hopes of a podium were dented when he slowed and dropped to sixth position behind Melandri and Chaz Davies.

Sykes and Rea continued to push hard with barely a tenth between the pair which left Guintoli struggling to stay hot on their heels. Further down the field, Loris Baz’s progression showed no signs of halting by moving up to eighth position on his Kawasaki.

With 10 laps remaining, Sykes bid for victory strengthened as Rea dropped back and the battle for second intensified. Rea was forced to concede as Guintoli and Melandri managed to slide past the Brit. Another rider on the move was Baz, who moved into sixth following two strong passes on Davies and Davide Giugliano.

The fight for second continued behind race leader Sykes with Melandri all over the back of Guintoli. The pressure eventually took its toll on the Frenchman with the BMW rider forcing  his way through.

Despite Melandri’s late surge, the race belonged to Sykes as he took the chequered flag for the second time this season from the Italian. Guintoli completed the podium in third finishing just ahead of Rea.