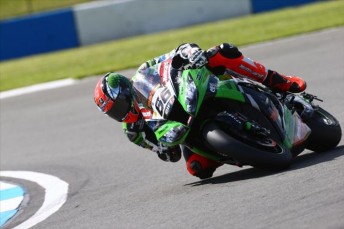 Kawasaki’s Tom Sykes will start from pole position on home soil after setting a blistering time in World Superbikes Superpole at Donington Park.

The Englishman has been the man to beat in all the previous sessions leading up to Superpole and he didn’t disappoint his home crowd, as he smashed his own lap record on three occasions to grab pole.

Sykes will start alongside the championship leader Sylvain Guintoli, who was more than half a second slower on his works Aprilia, with Ireland’s Eugene Laverty completing the front row.

Pata Honda rider Jonathan Rea was fourth ahead of fellow Brit Leon Camier on the Fixi Crescent Suzuki. Monza star Marco Melandri could only post a time good enough for sixth spot, but was only two tenths behind third placed Laverty.

Chaz Davies made it four Brits in the top eight in seventh ahead of Althea Aprilia’s Davide Giugliano and Alstare Ducati’s Niccolo Canepa. Former world champion Carlos Checa rounded out the top 10.

Australian Mark Aitchison was an absentee from Donington Park following the announcement that his Effenbert Liberty Racing Team have withdrawn from the 2013 World Superbike Championship.

*Did no progress to Superpole