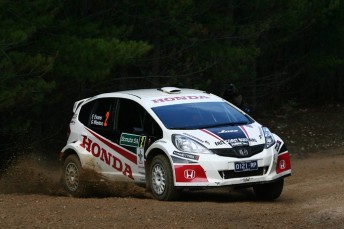 Honda’s Eli Evans has continued his outstanding run in the Australian Rally Championship winning the opening Heat of Scouts Rally SA and a victory on Sunday would see him pass Possum Bourne for the most consecutive Round victories.

Evans started the day with a one second lead over Scott Pedder and over the course of the day he only continued to increase the lead, taking six stage wins to Pedder’s two, the final margin 18.7 seconds.

“It’s been another perfect day for me,” said Evans.

“I started in front and held that position throughout the day. When I needed to I was able to extend the lead and that gives me a lot of confidence.

“I don’t know what sort of day the other drivers have had, maybe they’ve had problems, which means tomorrow they could well come out and give me a surprise.

“The (Honda) Jazz has been faultless though, the team have worked so hard between events and it just keeps getting better and better. The only real issue we had today was that we cracked another windscreen, through a dip that I’d marked as a ‘jump maybe’, well it turned out to be a definite jump and it hit hard and cracked the screen.”

For second placed Scott Pedder finishing runner up again might be starting to become a cause for concern, the Renault driver has been unable to better Evans since the opening Heat of Round 1 in Canberra.

“We haven’t been able to get on top of Eli recently but it’s a case of a lot of different little things,” said Pedder.

“Today it’s been lots of niggly problems all day. First we had an issue with the flat shift, so I’ve had to use the clutch between gears. Then we hit something and threw out the wheel alignment. And now the dash has stopped working, which means we have no shift lights, and in these cars you’re pretty reliant on knowing when to change so you’re not over-revving the engine.”

The Renault team was hurriedly changing the gearbox on both Pedder and teammate Tom Wilde’s car at tonight’s service, Pedder explaining why. “We ran a tall gear today for the fast stages, but it’s lacking pull, so we’re going back to the same set of gear ratios we ran at the first two Rounds.”

In a positive sign Brendan Reeves had a clean run through the day, having been blighted by technical dramas throughout the year, to finish third outright today.

“Although we had a clean day we still have some work to get onto the top step. Today I felt I was on the pace of Scott Pedder but Eli Evans is just that bit too fast for us right now.”

“Today we were good on tyres, so we have plenty left for tomorrow. I’m happy with the road conditions, we’re getting great grip and with no dust, so I’m looking forward to tomorrow because I think of got lots more to prove.”

On her return visit from Europe Molly Taylor had a strong day in her Fiesta R2, despite a late headache with a broken gearshift mounting, in the end she finished eighth.

“The gear selector turret came out of the floor, so my co-driver Seb had to hold it in place with the hand brake, which meant I had to reach around his arm to change gears, that was a bit of an adventure!”said Taylor.

“So I’d say it’s been an interesting day, the last loop of stages the car worked really well. But above all I’m just happy to be back rallying in Australia, especially here in South Australia, it’s a rally I absolutely love!”

In the National 4WD category the ‘Dash for Justin Dowel’s Cash’ looks to be heading the way of Declan Dwyer, as long as the local driver can maintain his pace tomorrow. Dowel though isn’t giving up yet, second today, and promising a concerted effort during Heat 2 to hang on to his $2,000 prize pool.