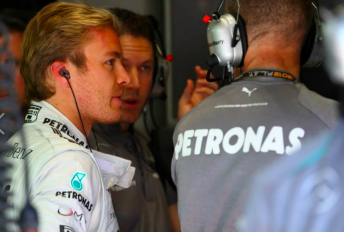 Nico Rosberg sweeps to another pole

Nico Rosberg claimed a hat-trick of pole positions after unleashing a stunning lap in qualifying for the prestigious Monaco Grand Prix.

Rosberg saved up his best until the dying seconds of qualifying by setting a 1:13.876s to lead the Mercedes-Benz team to a front-row domination ahead of the 78-lap race.

Lewis Hamilton had just landed at the top of the time sheets before Rosberg responded, pipping the Briton by .091s.

As all runners started Q3 on the super soft rubber, the track began to dry after rain had mixed up the earlier segments of qualifying.

The final part of qualifying hit top gear with just over five minutes remaining when Webber went to the top momentarily before Hamilton swept to the top spot.

Rosberg then dislodged his team-mate before Webber struck back again with another powerful lap.

Mercedes then pulled both cars into the pits for fresh rubber to launch one final raid when Hamilton went to the top before ultimately being stripped of the top time by Rosberg.

“We are improving but it’s difficult to understand the tyres. It’s still going to be difficult tomorrow,” Rosberg cautioned in the post qualifying press conference.

The shock of Q1 was Scot Paul di Resta failing to advance in a Force India that was struggling for rear traction.

On a wet/dry track Adrian Sutil avoided a double whammy for Force India by squeezing into the final segment of qualifying with a last gasp run.