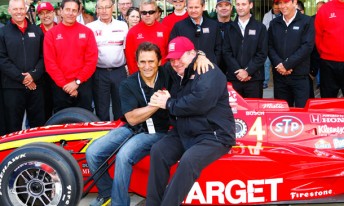 Alex Zanardi accepts his 1996 car from an emotional Chip Ganassi

A special guest of the Target Chip Ganassi team at Indianapolis this weekend is twice CART Champion, Alex Zanardi and he received a special gift from team boss Ganassi – the car in which he pulled off one of the most daring moves in IndyCar history at Laguna Seca.

The final lap move on Bryan Herta through the famed Corkscrew during the final race of the 2006 season is one that Zanardi sees as a pivotal point in his career and Ganassi sees the period of time with the Italian as a major part of the team’s DNA.

“So much of who we (TCGR) are is because of this guy here,” Ganassi said, wiping away tears and showing some rare emotion. “I have always said it takes a whole team to win championships but when you have Alex Zanardi as the heart of that team – everything is a little bit easier. There are a million things to say about this guy as a racer and competitor but nothing compares to what kind of a human being he is. The mold was broken when Alessandro Zanardi was born.”

Zanardi has been welcomed with open arms at the Speedway, with many drivers, including Tony Kanaan taking time out of their preparations for Sunday’s race to attend the presentation.

“(The presentation) was a very special moment and special because it happened at Indy after such a long time since I joined this environment,” said Zanardi, who’s CART titles came in 1997 and ‘98. “I can’t more than three steps before I get recognized and stopped by somebody and welcomed and cheered by fan. It’s fantastic. I just came here to enjoy a great race Sunday.

“On top of everything, it’s been magical for the reaction I’m receiving. What can I say other than thank you to everyone. The car is a beauty.”

During the height of his career in America, the former Formula 1 ace never got to race at the Indianapolis Motor Speedway due to the CART/IRL war, then he’d moved back to Formula 1 when Ganassi re-entered the 500. During the presentation he recounted his only lap of Indianapolis:

“I paid a dollar and had the bus ride with all the tourists,” he laughed. “And a race fan called me Arie Luyendyk!”

During many of the interviews at Indy that Zanardi has been doing, at the age of 46 he has not ruled out returning to the seat of an IndyCar and to complete an Indianapolis 500 despite the controls that would need to be fitted to the car after the 2001 accident at the Lausitzring in Germany, where he lost both his legs.

He declared he would have a go at qualifying for the Indy 500 last year when he won his Gold Medal in the London Paralympics.

“At my age, you no longer have the ability to keep the right focus throughout the season as you do in your 20s,” said Zanardi. “But I want to believe I’m still very passionate for the sport. I still have the capability to steer the wheel. If down the road, the right opportunity would arise, for sure I’d be curious about it.

“It’d be fantastic, but it would also be fantastic to kiss Charlize Theron, and this will never happen in my life.”

With what Zanardi has achieved, it wouldn’t be fair to rule out him making a success at Indianapolis…or kissing Charlize Theron!

VIDEO: THE PASS – ZANARDI ON HERTA: