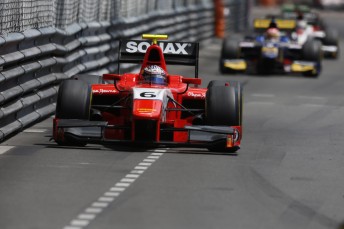 Mitch Evans on his way to third in the GP2 Feature race in Monaco. Pic: GP2 Series Media

New Zealand’s Mitch Evans secured his second podium of his rookie GP2 season as he came home third behind victor Sam Bird and Kevin Ceccon in a chaotic feature race at Monaco.

The Auckland racer looked in a strong position to record his maiden victory but tyre degradation saw him lose the lead after the pit stops and allowed Russian Time’s Bird to claim a comfortable win. Click through to read full report/results on Speedcafe.co.nz