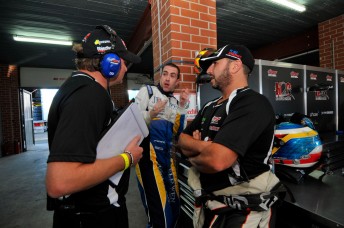 Accomplished Porsche racer Alex Davison has rocketted to the fastest time in the qualifying session for Pro drivers at the Rennsport Motor Racing Festival at Sydney Motorsport Park.

The Kiwi driver Jonny Reid, who was called up at the last minute to replace Lee Holdsworth who had been delayed in the US after the V8 Supercars meeting, was third quickest.

Championship leading Craig Baird was 11th fastest in the session.

Davison had shown decent speed in the practice sessions and was stoked to top the times in what is being claimed as the strongest line-up of talent in Australian Carrera Cup field history.

“I was surprised because the car doesn’t feel that good,” Davison told Speedcafe.com

“I had dramas in practice with the brakes but we were able to rectify that.

“We still have work to do to get the balance a bit better so I’m not confident we have got a good race package yet.

“Everyone has been saying that they wanted to get on the pole so I’m stoked that it was me.”

Davison’s team-mate Tony Bates was seventh fastest in the session for Elite drivers which was topped by Adam Gowans.

However on combined times the pole position has been taken by Steve Owen and James Koundouris with Shae Davies and Adam Gowans starting in second.

Davison/Bates will start from third ahead of Warren Luff/Geoff Emery.

Baird and his partner John Penny will start from 12th after finishing with an accumulated time of 3:04.925s, 1.6s slower than Owen and Koundouris.

Both Pro and Elite drivers must start in at least one of the two one-hour heats tomorrow with the driver change window set between 25-35 minutes into the races.