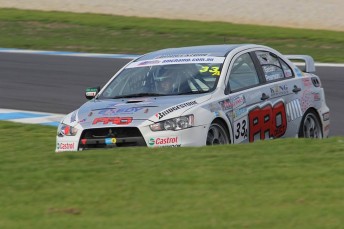 A lockout of the top three positions has stamped the Mitsubishi teams as early favourites for the inaugural Great Southern Four hour endurance race at Phillip Island this weekend.

The strong early pace by the trio of Lancers was the focal point of a busy day of practice as the third round of the Shannons Australian Motor Racing Nationals commenced at the seaside Victorian circuit.

The similarly strong CXC Global Raving entry of Dylan Thomas and Ryan Simpson placed third overall with Beric Lynton and Tim Leahey fourth in the first of the BMWs.

There were promising debuts from two new marques and cars to the championship – the Mazda 6 MPS of Adam Dodd and Matthew Bell and the Toyota 86 shared by Grant Phillips and Andrew Turpie. Reigning Australian Formula Ford Champion and Formula 3 front runner Jack LeBrocq adapted to his switch from open wheels to a 6.3-litre Mercedes Benz SLS AMG superbly today, laying down an impressive 1:27.0s marker in practice for round three of the Australian GT Championship.

An otherwise trouble-free practice day was marred by a big impact into the pit wall by  Lamborghini driver Jan Jinadasa, who ran wide out of the final turn before making hefty contact with the unforgiving concrete.

The Melbournian was unhurt in the crash, though his Gallardo GT3 was substantially damaged. His team will be burning the midnight oil tonight as they attempt to return the car to the circuit for the first race. 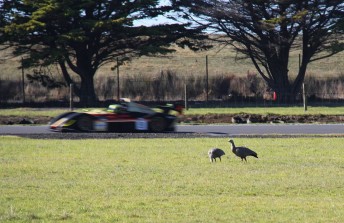 The pace was similarly hot in the Radical Australia Cup, James Winslow needing just a handful of laps to shatter expectations about just how fast the new, 2.7-litre V8 powered SR8s would be on the high-speed 4.46km circuit.

His 1:26.34s lap in practice one showcased how fast the 450bhp cars will be – with more pace expected tomorrow on new tyres and in the heat of qualifying.

Andrew Price led a feisty pack of Suzuki Swift’s in their practice sessions today, ahead of a big weekend for the one-make series.

The Swift field will run a one-hour race on Sunday within the Great Southern Four Hour, their field starting 10s behind the AMChamps cars and racing for the first hour of the enduro before receiving the chequered flag.

Chris Barry topped practice for the PRB Racing Series. Saturday’s program features the first of two, one-hour races that make up round three of the Australian GT Championship presented by Pirelli plus sprint races for the Radical Australia Cup.

The grid for the Great Southern Four Hour will also be determined with two qualifying sessions for the AMChamps cars.